Happy People: A Year in the Taiga 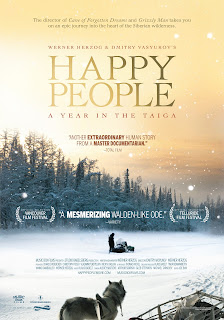 Happy People: A Year in the Taiga (2013)
Dir. Werner Herzog and Dmitry Vasyukov

Here’s a serious question: could any documentary be improved just by adding Werner Herzog’s mellifluous voiceover?  That notion is put to the test in Happy People: A Year in the Taiga, a project that lacks Herzog’s presence behind the camera - all of the footage was compiled by his Russian co-director, Dmitry Vasyukov, whose unedited footage was collecting dust until Herzog saw it and offered to cut it into a feature - but embodies his irrepressible curiosity about man’s place within the natural world.

However, despite Herzog’s eye for interesting detail and Teutonic-inflected musings, the film is oddly detached from his personality.  Befitting its title, Happy People is downright cheery about life in one of the harshest natural environments on Earth: a remote fur trapping village smack in the middle of the Siberian permafrost.  It depicts a year in the life of several fur trappers in Bakhta, which is so far off the beaten path that it’s only accessible by helicopter (and also by boat, if you happen to travel during the few months when the river isn’t frozen).  These men are hardy types who matter-of-factly demonstrate the tricks of their trade during year-long preparations for the next winter trapping season.  It’s easy to see what Herzog appreciates in them, one master craftsman finding his determination, skill, and professionalism reflected in others.

That same fastidiousness is what makes Happy People just a bit too passive for general audiences.  It often feels like the work of a distant observer, which is precisely what it is.  Inviting us to sit back and quietly observe the rhythms of life in this small community is not a bad strategy for a novice documentarian, but this is Herzog we’re talking about.  There's little indication that this is the same director who recently dropped a redneck soliloquy on upward mobility into a film about the death penalty; he appears to be coasting here.  Part of that is attributable to working with footage obtained second-hand, but Vasyukov’s images of impossible landscapes - set to a booming Klaus Badelt score - certainly aren’t what is holding the film back.

Happy People simply lacks the level of insight seen in his previous nature docs like Grizzly Man and Encounters at the End of the World - though a trapper trudging up an icy incline being likened to a “prehistoric man from a long-ago Ice Ace” is a victory in the analogy department.  In the end, the film’s most memorable voice belongs not to Herzog but to a middle-aged trapper who speaks of being airlifted into the taiga at the age of 18 and struggling to survive his first winter.  Now he goes about his business - splitting wood, honing skis, setting traps - with a quiet satisfaction.  He describes these routines as a perfect state of contentment, of “the sense of a job being done,” one of the few indications of that elusive happiness (some of the subjects, like the native Ket people stuck in cycles of poverty, neglect, and alcoholism, lend a bitter irony to the film’s title).  The people of Bakhta lead lives that are light in superficial comforts yet complex in terms of what’s necessary for survival.  They are lives of clear, if simple, purpose.  It’s not exactly a subject that begs for the Herzogian philosophical treatment - something it feels like he gradually realized while looking at Vasykuov’s impartial portrait of the land and its inhabitants, and eventually deciding to let that speak for itself.
Posted by Eric Ambler at 8:05 AM

Email ThisBlogThis!Share to TwitterShare to FacebookShare to Pinterest
Labels: Happy People: A Year in the Taiga, reviews