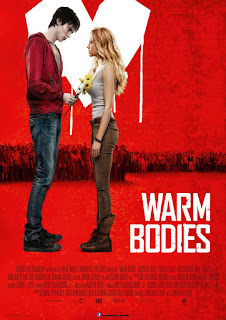 Adolescent love easily lends itself to cinematic metaphor, particularly in the everything-is-supernatural era where studios are scrambling to identify the next Twilight (why hello there, Beautiful Creatures).  In this climate, the zombie romance Warm Bodies seems like a weird little orphan, a refreshingly light spin on the genre that’s still painfully aware of its own commercial savvy.  There's a juicy kernel of satire in a lovesick zombie known only as R. (Nicholas Hoult), who consumes the brain of a young man (Dave Franco) and is suddenly overcome with amorous feelings for his victim’s former girlfriend, Julie (Teresa Palmer).  He whisks her away to safety in the abandoned jetliner he calls home and attempts to articulate his romantic interest.  Just like any couple taking their first awkward steps together, R. and Julie try their best to find common ground.  She’s impressed by his record collection and wonders why a zombie would spend time collecting such artifacts, to which R. grunts, "Sound...better.”  Who knew the undead were such audiophiles?

It’s not hard to see the humor in positioning a brain-dead follower as the quintessential puppy lover.  And for a little while, director Jonathan Levine (50/50) is able to sustain the film’s promise as a daffy send-up of teen romances and an enjoyable romantic comedy in its own right.  R.’s instantaneous devotion and totally compliant attitude are funniest when bouncing off other performers with comic chops, like Rob Corddry as R.’s zombie bro and Analeigh Tipton (Damsels in Distress) as Julia’s BFF.  Lest we forget that this is also a monster movie, Warm Bodies injects danger into the plot via the “Boneys,” a skeletal sub-race of aggressive zombies that pursues R. and Julia all the way to the human survivors’ walled stronghold in the center of an unnamed post-apocalyptic city.  This only compounds the stress of Julie’s father (John Malkovich), the leader of the human resistance.  He’s not the only dad ever to disapprove of the mumbling, shuffling slacker brought home by his daughter, but he’s probably the first to immediately insist upon shooting the young man in the head.

Despite its intermittent cleverness, Warm Bodies feels like a missed opportunity.  Levine, who also scripted, struggles to spice up the story's obvious Romeo and Juliet through-line - take a second look at those character names.  He also fails to elaborate a satisfying mythology for the horror/sci-fi elements, undermining the film’s central conceit.  In his voiceover narration, R. admits that he can’t explain the origins of either the “normal” zombies or the Boneys, and they all seem able to go for days without any sustenance.  Furthermore, the humans appear to live in relative comfort incongruous with their situation, with unlimited access to electricity and running water.  (I guess utilities workers were spared the plague.)  All of this means that the key conflict of the second half - changes in the physiology of the zombie community, sparked by R.’s unlikely infatuation - registers as contrived and overly simplistic without the proper background information.  Warm Bodies is a pleasant enough diversion for audiences who will appreciate poking a little fun at rom-com and zombie movie tropes, but much like its protagonist, it’s constantly in need of some more brains.
Posted by Eric Ambler at 6:09 PM