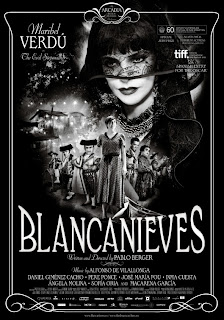 There’s no shortage of beauty in Blancanieves, a black-and-white silent movie that re-imagines the tale of Snow White in Seville, Spain during the 1920s.  The film’s comeliness is propelled by its dialogue-free conceit, as writer-director Pablo Berger seizes on the power and pleasures of the pure cinematic image.  His imagination is certainly invigorated by the challenge, merging the iconography of the classic Grimm Brothers fairy tale with a wonderfully detailed portrait of Spain during the Roaring Twenties.  It’s an ideal setting for the heightened emotions of this tongue-in-cheek adaptation.  Blancanieves tosses out strikingly romantic images with ease, often aided by an old-fashioned sense of tactile pleasure and clever visual motifs – like a full moon that dissolves into a little girl’s first communion wafer.

That girl is the spirited Carmencita, the child of a famous bullfighter and a gorgeous dancer who, in typical Grimm Brothers fashion, is snared in a web of tragedy almost as soon as she is born: her mother dies in childbirth on the same day that her father, the great torero Antonio Villalta (Daniel Giménez Cacho), suffers a crippling injury that ends his career in the bullring.  Heartbroken and depressed, he remarries the gold-digging Encarna (Maribel Verdú), securing for Carmencita a wicked stepmother who keeps her from knowing her father and forces her into a life of servitude.

Years pass, and Carmencita – now know as “Carmen” – grows into the attractive, vivacious young woman played by Macarena García.  This is of course too much for the aging Encarna, so she sends a lackey into the woods with Carmen with orders to drown her.  From here the story proceeds more or less like the classic version with all of its signifiers – the merry dwarves, the poison apple, the glass coffin – interpreted with a few ingenious twists – particularly the heroine’s rousing reinvention as a top-drawing bullfighter, as well as the person to whom Berger assigns the role of “Prince Charming.”

The sly humor and modern gender politics of Blancanieves set it apart from the countless filmed versions of the Snow White story, as well as another self-conscious homage to the golden age of silent cinema.  Though it’s hard to avoid comparisons with The Artist, it’s worth noting that Berger’s film has more somber notes than Michel Hazanavicius’ Oscar-winning lark.  Berger also doesn’t feel as beholden to tradition, employing a lively flamenco score and rapid-fire editing alongside classic Hollywood storytelling techniques.

The desire to accomplish both goals occasionally leads to frustration.  Berger vacillates too much on which direction he ultimately wants the film to go, especially in the final act – an odd, overly serious anticlimax that arrives 10 minutes too late overcompensates for the more trivial leanings of the movie’s latter half.  Still, there’s more than enough fidelity to Blancanieves’ fairy tale origins to keep its whimsical charm intact, no matter what modern guise it tries to assume.
Posted by Eric Ambler at 5:16 PM