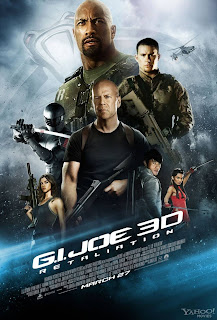 Though G.I. Joe’s 1980s heyday coincided with the very real military brinksmanship of the Cold War, the evil Cobra organization always felt like it was populated with an old-fashioned breed of villain – characters whose idiosyncrasies and nefarious world-domination plots were borrowed from vintage Bond films, rather than ripped from the headlines.  The bombast of these flamboyant multinational terrorists is about the only notable element of the uninspired sequel G.I. Joe: Retaliation.  Despite the capture and imprisonment of their top brass, Cobra still has an ace in the hole: an operative impersonating the President of the United States (Jonathan Pryce) who peppers his speech with cheesy gems like “I’m the quicker blower-upper, baby.”

Nevertheless, the subterfuge goes unnoticed by the G.I. Joes, who have experienced their own personnel changes in the interim.  Square-jawed leader Duke (Channing Tatum) is joined by new recruits Roadblock (Dwayne Johnson), Flint (D.J. Cortona), and Lady Jaye (Adrianne Palicki).  Their ranks are thinned further when the imposter president orders an attack on the Joes and frames them as traitors attempting to hijack a nuclear warhead.  With the help of mercurial ninja Snake Eyes (Ray Park), it’s up to the newbies to clear their names and foil Cobra’s plan to trick the world’s atomic powers into disarming their nuclear arsenals at a bogus peace summit.

Taking the franchise reins from Stephen Sommers, Step-Up series veteran Jon Chu is an able caretaker who adds a kinetic energy to several of the action sequences.  He particularly excels outside of a firefight, as in a sideline ninja revenge saga that peaks with a daring raid on a Himalayan monastery where Snake Eyes pursues convalescing Cobra agent Storm Shadow (Byung-hun Lee).

Unfortunately, the bulk of Retaliation is puzzlingly subdued and removes all of the colorful silliness that partially redeemed its predecessor, G.I. Joe: The Rise of Cobra.  While Rise’s climax took place in an underwater Arctic base, Retaliation meanders through nondescript bunkers and military compounds, telling you everything you need to know about its dearth of imagination.  Chu periodically bucks the trend with appropriately campy appearances by a fully-masked Cobra Commander (voice of Robert Baker) and vaguely Cajun henchman Firefly (Ray Stevenson), but that only lasts so long before he has to re-focus on the clunky, nondescript plot.
Not even the legacy addition of Bruce Willis can make this retooled cast of good guys remotely memorable.  Despite its unnecessarily bloated runtime – perhaps the result of the studio’s well-publicized decision to add more scenes featuring Tatum – the movie barely has enough time to flesh out its heroes beyond the most perfunctory of clichés.  (Pity Cortona, whose ridiculously underwritten character exists solely to demonstrate Johnson’s leadership abilities.)   While far from unwatchable, Retaliation is the typical action sequel that that takes few risks and strongly suggests its financially-motivated origins in scattering a handful of exhilarating moments across almost two hours of bland, rehashed visual pabulum.
Posted by Eric Ambler at 10:54 PM