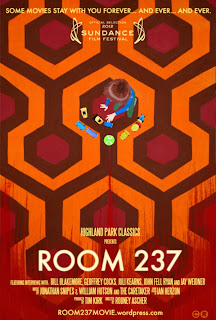 One of the best qualities of art - perhaps the best quality - is that it can take on meanings beyond its creator's original intent.  But how far is too far?  That's the question posed by Room 237, a feature-length critical analysis of Stanley Kubrick's The Shining.  Its commentators are not film scholars but five individuals convinced that Kubrick buried a secret subtext beneath the staccato chills of his classic 1980 horror film.  Though idiosyncratic readings of the famously mercurial director's work are not uncommon, Room 237 explores the wildest theories about what Kubrick was really up to in The Shining - which range from a commentary on the genocide of Native Americans to experiments in subliminal Freudian messaging to a sideways confession about his role in the Apollo moon landing conspiracy - that reveal far more about the theorists and their runaway imaginations than the film itself.

Juxtaposing the audio from individual interviews with five Kubrick fanatics sharing their interpretations of The Shining, as well as a passel of clips from Kubrick's filmography (and beyond), director Rodney Ascher creates a mesmerizing patchwork portrait of obsession.  The constantly flowing stream of information helps rein in the more digressive interviewees, with Ascher turning otherwise pedantic moments into the groundwork for a series of mini-movies all occurring at once, cleverly arranging each explanation into a rhythm of subtly escalating tension and cathartic payoffs.  Even the most far-fetched ideas are treated seriously - though some inevitably wind up as the target of the documentary's sharp deadpan humor.  A prime example: a blogger's insistence that The Shining is meant to be watched "backwards and forwards" leads one interviewee to superimpose a normal projection of the film with one running in reverse, a quixotic project that echoes claims from generations of stoners who insist that Dark Side of the Moon totally syncs up with The Wizard of Oz.

Even as he gently skewers the head-spinning mental gymnastics required to generate these theories, Ascher humanely tries to find at least a sliver of a rationality in all of them.  Of course, some are more eloquent than others.  Veteran journalist Bill Blakemore's conviction that Kubrick was attempting to convey the horror of atrocities committed against Native Americans stands out as an intriguingly specific reading that falls in line with more mainstream interpretations of Kubrick's oeuvre - particularly the way it positions audience members as impotent witnesses to unspeakable and unfathomable evils.

However, Ascher's video collage suggests that in trying to certify Kubrick's brilliance, these armchair analysts are not seeing the forest for the trees.  Room 237 is all about paying tribute to The Shining as a polished piece of psychotronic cinema from a highbrow auteur.  It's so insidiously effective at burrowing its way into the mind that viewers easily overlook the genius of its execution; one of the interviewees even admits the possibility that Kubrick created a psychological trap specifically to ensnare those who looked at it too closely.  Likewise, viewers shouldn't be fooled by Room 237's superficial resemblance to a sophisticated YouTube video essay.  Ascher's film traverses the darkest corners of pop cultural obsession in a contemplative yet mischievous manner that communicates what Kubrick maybe was trying to say all along: All work and no play makes Jack a dull boy.
Posted by Eric Ambler at 6:13 PM