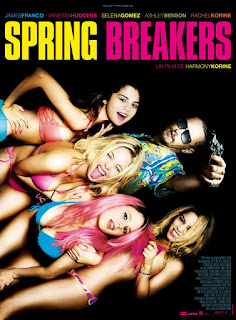 Here's the defining image of Spring Breakers, the latest teenage fever dream from professional provocateur Harmony Korine: a young woman brandishing a gun while wearing nothing but a Day-Glo bikini, high tops, and a pink ski mask.  Or maybe it's James Franco as Alien, a rapper/drug dealer with gleaming silver grills and a panoply of chest tattoos, plinking Britney Spears ballads on a poolside piano.  As a film that feels reverse-engineered to get us to these specific moments, it's easy to dismiss as a gonzo travelogue calibrated for maximum shock value, glamorizing the reckless hedonism that it ostensibly intends to critique.  They have a name for that kind of movie: exploitation.

Simple exploitation, however, isn't supposed to be as lyrical as Spring Breakers.  Projecting a vision that's nightmarish and exuberant and gaudy and brilliant all at once, Korine examines the bacchanalian rites of university students from the perspective of three rowdy co-eds - Candy (Vanessa Hudgens), Brit (Ashley Benson), and Cotty (Rachel Korine, his real-life spouse) - who acquire their travel funds by brazenly robbing a diner in their college town.  They’re joined by their naive Christian friend Faith (Selena Gomez), who accompanies them to Florida on the wishful premise that the change of scenery will rekindle their sisterhood and spark some personal epiphanies.

The atmosphere of unfettered exhibitionism in the sun, surf, and seedy motels of St. Petersburg makes an obvious backdrop for a cautionary tale of a “good girl gone bad,” but Korine upends expectations and presents a story about bad girls becoming worse.  Guiding them in their downward spiral is the aforementioned Alien, who bails the foursome out of jail after they’re busted at a cocaine party.  Once Faith - the lone character with anything resembling a moral compass - decides to escape on the first bus back home, Spring Breakers shifts gears completely as the remaining girls embrace Alien as their slimy spirit guide.  ("I'm livin' the American Dream!" he bellows as he shows off his vast collection of automatic weapons and expensive fragrances.)

The abruptly sinister turn of events - which builds to a typical action climax vis-a-vis an intense gang war with Alien's mentor-turned-nemesis (Gucci Mane) - takes some of the satirical bite out of  this ode to curdled narcissism.  Still, Spring Breakers is unquestionably at its best when Korine and his cast are going for broke.  It's exhilarating to watch them toe the line between sheer genius and pure camp, from Franco's dead-on caricature of a white trash hoodrat who could be the younger cousin of Matthew McConaughey's character in Magic Mike, to Korine shooting the beachfront tourist traps and grubby urban sprawl of the Tampa Bay area in the intimate, ethereal style of his idol, Terrence Malick.

It's difficult to tell exactly what to take seriously amid the sparse dialogue, chaotic visuals, and hypnotic score from Cliff Martinez and Skrillex, but looking for a deeper message defeats the purpose of the film.  (Alien's plaintive, oft-repeated whispering of "Spring break...spring break forever..." is as close as it gets to a thematic statement.)  Like spring break itself, Spring Breakers is a libertine vacation from intellectual responsibility, though not without the hangover that reminds us of the dark self-delusion necessary to keep the party going at any price.