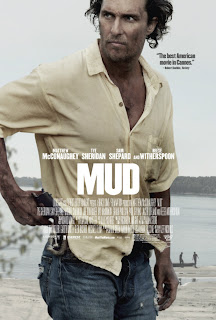 Mud, the third film from writer-director Jeff Nichols (Take Shelter), spins a tale of youngsters in peril that plays like a contemporary update of the Tom Sawyer and Huckleberry Finn mythos.  Kids getting into trouble during the summer makes for more compelling cinema than say, the ones going to basketball camp, but it's rare to see a movie like Mud that follows this well-trod path to more realistic, frankly upsetting places.  It helps that the setting - a rural Arkansas backwater where creaky houseboats abut the Mississippi River - is just the type of place where unsupervised rapscallions can quickly get in over their heads.

Two 14-year-olds, Ellis (Tye Sheridan) and Neckbone (Jacob Lofland), discover a boat stranded high atop a tree on a remote islet and start making plans to retrieve it, before they realize that it's already the habitat of a fugitive named Mud.  And since Mud is played by the resurgent Matthew McConaughey, he's many things you'd expect - laid-back, forthcoming, occasionally shirtless - and some that you don't.  Despite his elaborate snake tattoo that winds from shoulder to wrist, this McConaughey is not the reptilian predator of Killer Joe or Magic Mike: he's a romanic, pistol-toting mystic desperate to reunite with the love of his life, Juniper (Reese Witherspoon), a woman who only seems to need Mud when she needs rescuing.

The grandeur of Mud’s quest appeals to the sensitive Ellis, whose perspective turns Mud from a crime thriller into a tender and dramatic coming-of-age tale.  It’s a nimble feint by Nichols (an Arkansas native), as he still manages to pull a palpable sense of danger from the general structure of a junior detectives paperback.  Mud’s ambiguous nature - confirmed by a crusty ex-Marine (Sam Shepard) who lives on a houseboat across the river from Ellis’ family - and history of committing violence against Juniper’s abusive lovers doesn’t seem to bother Ellis, though it does raise red flags for the skeptical Neckbone, who’s learned a thing or two about charismatic posturing from living with his punk rocker/oyster diver uncle Galen (Michael Shannon).

Mud works best when it focuses on Ellis’ painful transition from an idealized concept of love into the adult reality of compromise and heartbreak.  It would be even better if Nichols didn’t feel the need to heavily underline this message at every opportunity, tossing in parallel subplots about the looming divorce of Ells' parents (Deadwood alums Ray McKinnon and Sarah Paulson) and a predictably doomed attempt to woo his older crush (Bonnie Sturdivant).  Mud beats its themes to death through the periodic speechifying of its adult characters, who spell out Life Lessons in big, bold letters - a flaw that's especially conspicuous since most of the film is so wonderfully understated.  However, Nichols is savvy enough to focus on the things that quietly demand our attention, like the hardscrabble beauty of the lower Mississippi and an assured performance from The Tree of Life's Sheridan, evoking a world as rich and alluring and morally complex as the one Twain wrote about.
Posted by Eric Ambler at 7:49 PM