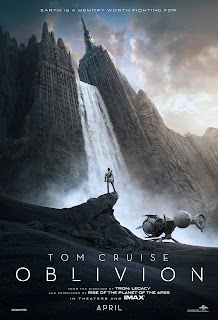 Earth is a lonely planet in Oblivion, a stark piece of science fiction that imbues a post-apolcalyptic world with a kind of beautiful desolation.  The film follows pilot and mechanic Jack Harper (Tom Cruise) as he ticks off his last days on this ruined world, repairing the armed drones that protect Earth’s precious remaining resources from the vestiges of an invading alien force.  The war went nuclear long ago, forcing the survivors off-planet to colonize one of Saturn’s moons.  Jack - along with his navigator/lover Victoria (Andrea Riseborough) - are part of a handful of humans tasked to sticking around until a string of giant reactors finishes converting the oceans into an energy source that will fuel their escape vessel, an ominous grey tetrahedron that floats in constant orbit overhead.

The last time Joseph Kosinski directed a sci-fi film, the result was Tron: Legacy, his overhyped debut that married gorgeously sleek visuals to a completely nonsensical story in a gambit to pry open the wallets of nostalgic computer nerds everywhere.  (It worked, to the tune of $400 million worldwide.)  Thankfully, Kosinski’s second effort has less of a mercenary feel, attributable to both its origins - Oblivion was first a graphic novel co-written by Kosinski and Arvid Nelson - and its commitment to combining the solitude and disaffection of quirky 1970s sci-fi films with state-of-the-art visuals.  And for a while, it’s the best of both worlds: Oblivion spends an awfully long time for an effects-heavy blockbuster on drawing its simple portrait of a workingman, with Jack embarking in his (unfortunately genitalia-shaped) aircraft to check on damaged drones.  Kosinski takes his time in establishing the particulars of a new type of survival, one wholly dependent on these lifeless orbs with an unblinking red eye that’s an unmistakable homage to 2001’s HAL 9000.

Of course, this cannot last forever.  There are battles to be had and plot twists to uncover, and further description would engender spoilers.  Suffice to say, however, that not all of Oblivion’s secrets are worth guarding so closely.  To his credit, Kosinski uses design as more than just an excuse for cool-looking contraptions and whirlwind firefights, communicating in subtle ways the unsettling and sinister artificiality of Jack and Victoria’s existence (for a post-nuclear world, all the techonlogy sure is shiny and clean).  But after teasing the exploration of several intriguing ideas - the nature of human memory, the ethics of drones - the film settles into a less challenging narrative arc, especially after Jack rescues a crash-landed astronaut (Olga Kurylenko) who looks exactly like a woman in his recurring dreams of a pre-ruined Earth.  The transition to a more visceral experience mirrors the shift in Cruise’s character, from curious Everyman gradually waking up to reality to a generic “chosen one” protagonist who mutates into yet another version of his smarmy flyboy from Top Gun.  But Kosinski has learned a few lessons from Tron, creating in Oblivion a treat for the eyes and ears (thanks to a complementary score by electronic pop artist M83) with more than a few moments of eerie stillness that linger long after its sensory pleasures have faded.
Posted by Eric Ambler at 1:17 PM