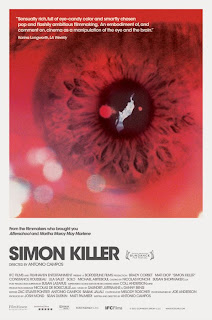 The basic plot of Simon Killer reads like a variation on something we've seen in the movies many times before: after a nasty breakup, recent college graduate Simon (Brady Corbet) takes a trip to Paris to clear his head.  But even if the title wasn't a dead giveaway, there'd be no mistaking this film for a redemptive romp or a moody travelogue reflecting on love and loss.  Instead, director Antonio Campos creates a bracing study in self-immolation - a nasty, nervy tale that requires an open mind to fully absorb what comes tumbling out of the damaged one on display.  Campos takes the saturnine self-absorption and violent sexuality of American Psycho and buries them even deeper inside a handsome cipher meant to symbolize the failings of modern masculinity.  Yet whereas Mary Harron's classic thriller used blunt satire to indict an entire generation for its bankrupt moral values, Simon Killer takes an obsessive, hyper-granular approach as it observes one man succumbing to his demons and a massive creeping paranoia.

And, boy, does Simon Killer ever creep along slowly.  Simon mopes around the apartment of a family friend, periodically emerging to shuffle around the Louvre or go to the movies.  His halting attempts at socializing lead him to a brothel where he meets Noura (Mati Diop), a prostitute with whom he has an intense, almost immediate connection.  It would be wrong to call their relationship a romance, however.  Despite the culture shock and the language barrier - which actually provides the film with its most powerful scene in Noura's lengthy monologue about her tragic past, a story fatally misinterpreted by Simon - the foreigner sets off to manipulate as many Parisians as possible, starting with the sob story he concocts to shack up with Noura and extending to the extortion of her married clients with secretly filmed videos of their illicit trysts.

The long, deliberate set-up of his con job is admittedly necessary to achieve the devastation of its inevitable collapse.  But Campos tries the audience's patience with diversions that provide little, if any, shading to Simon's despicable character - a club scene that pointlessly holds on a gyrating Corbet for more than half of LCD Soundsystem’s 8-minute opus "Dance Yrself Clean" is particularly grating.  Simon Killer is at least an excellent showcase for Corbet, who receives script credit along with Campos and his co-star Diop.  He turns in a creepily committed performance, using his scruffy handsomeness and piercing gaze to the same off-kilter effect he achieved in the cult runaway drama Martha Marcy May Marlene.

Still, it's difficult to tell how much of Simon's arrogance and alarming behavior is intended to serve Campos' portrait of an overwhelmingly ugly American, and how much of it is simply the character's solipsism rubbing off on the filmmakers.  The most shocking moment in Simon Killer that has nothing to do with the film's violence, but the offhand way it indicates, near the end, just how much time Simon has spent languishing in the darkest depths of his ego.  Much of the surprise has to do with the muddled and haphazard manner Campos has portrayed the presumably important events in this span; it's disorienting in both good ways and bad.  Simon Killer hunts for something substantive in its investigation of the monster lurking beneath the civilized veneer of a sensitive man, but too often it's as hollow as the callous, unrepentant coward at its core.
Posted by Eric Ambler at 6:28 PM