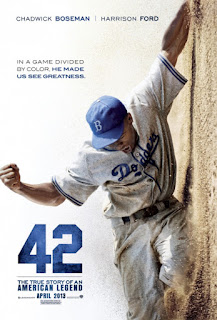 There’s definitely a complex, compelling movie to be made from Jackie Robinson breaking baseball’s color line, suiting up for the Brooklyn Dodgers in 1947 as the first African-American in the major leagues.  Remember: this is one year before President Truman desegregated the U.S. military, eight years before Brown v. The Board of Education, 16 years before the “I Have a Dream” speech.  In a certain sense, Robinson was the first leaf on the wind of change.  And while the hagiographic drama of 42 does justice to Robinson’s personal experience, it cries out for a larger context, or at least more commentary on why some people were so afraid of a black man proving himself in a white arena of competition.  It’s not even a history lecture - it’s a Sunday school lesson.

Make that a slickly-made, well-acted, emotionally-rousing Sunday school lesson.  Stories that depict the fight against prejudice and bigotry with intelligence and empathy will always be necessary, and 42 nails its mark.  Chadwick Boseman stars as Robinson, tracking his journey from college-educated, politically conscious Negro Leagues all-star to Dodgers rookie and civil rights pioneer.  The movie employs sportswriter Wendell Smith (Andre Holland) as a device to literally chronicle Robinson’s triumphs and challenges on the road to the big leagues.  While this results in a highlight reel of ugly incidents juxtaposed with flashes of Robinson's transcendent talent, 42 cobbles together a deep bench of memorable supporting characters, from Nicole Behari as Robinson’s supportive wife to Christopher Meloni as colorful Dodgers manager Leo Durocher to Alan Tudyk as the virulently racist Phillies manager Ben Chapman.  There’s even a strong sense of the melting pot amongst Robinson’s teammates: if there’s a faint subtext to 42, it’s about baseball’s reflection of the general postwar upheaval in America’s ethnic identity and social mores.

Oscar-winning screenwriter Brian Hegeland (L.A. Confidential) directs with his eye on the bleacher seats, spelling out not just his script's binary morality but also some of the baseball nuts and bolts (the balk rule is explained in the most awkward way imaginable) to make the film’s appeal as broad as possible.  42’s one hint of nuance comes in the form of Dodgers president and general manager Branch Rickey (a lively Harrison Ford), a wonderfully Machiavellian figure and iconoclast deserving of his own biopic.  He jokes about the financial motivation behind his controversial gambit, leaning on Robinson to produce results despite the unfathomable abuse from fans and peers while simultaneously dressing down (in private) any member of the organization who fails to fall in line.  Hegeland, though, has no such trouble, as all the pieces of 42 - from its beautiful CGI re-creations of midcentury ballparks to its on-the-nose dialogue - snap neatly and predictably into place.
Posted by Eric Ambler at 10:13 PM