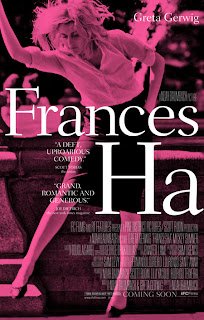 The cultural zeitgeist is, by definition, ethereal.  Successfully channeling it requires the luck to be in the right place at the right time, both in the geographic and demographic sense.  Frances Ha, the latest film from writer-director Noah Baumbach (The Squid and the Whale), takes a bifurcated approach to this challenge in its story of Frances (Greta Gerwig), an underemployed dancer stumbling across New York City from one unfulfilling experience to the next.  The film combines Baumbach’s familiarity with the ennui of youthful, creative urbanites and the sympathetic - and age-appropriate - voice of Gerwig, his star and co-writer, to create a cross between the snappy socialization of Lena Dunham’s Girls and the neurotic ramblings of Woody Allen.

Fans of Dunham’s work in particular will find plenty of Frances Ha familiar, from the way Frances orbits her self-actualized roommate/BFF Sophie (Mickey Sumner) to the excellent work of Adam Driver as an oddball Lothario who welcomes Frances into his lease (but not his bed) once Sophie decides to move to a more expensive apartment.  But Baumbach also uses these reference points as a springboard for a more expansive portrait of a quarter-life crisis, acknowledging the world beyond the bastion of big city hipsterdom.  The attitudes and argot on display may be intensely personal but the film’s broader thematic underpinnings - the passive competition in close friendships, the never-ending difficulty of fitting in, the gentle skewering of middle class conceptions of poverty (when Frances whines about her lack of money, a friend playfully points out that she’s offending actual poor people) - are universal, especially to anyone who’s ever discovered that being yourself is still pretty tough once you’re on your own.

While Frances Ha has the same issues as any navel-gazing treatise on young city dwellers, Baumbach manages to invest it with a real sense of romance, making it his most whimsical film to date.  The gorgeous black and white photography helps in this regard, turning some grimier areas of New York into a playground of possibility as Frances twirls down the sidewalks to the sounds of David Bowie’s “Modern Love.”  The director can also bank on the immense charm of his leading lady, who gives an enchanting performance while remaining a convincing (and, in the words of another character, “un-dateable!”) adult-in-progress.  Like the film itself, Gerwig slowly but surely ingratiates herself with the audience as she shuffles toward maturity - and not a moment too soon.  “Take your time,” says the director of Frances’ dance company after delivering a bit of disappointing news, one of several setbacks on her road to independence.  “I will,” she replies, “I can’t help it."
Posted by Eric Ambler at 9:37 AM