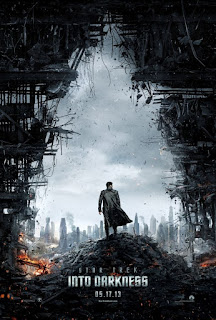 J.J. Abrams’ breathless fusion of sci-fi and action in 2009’s Star Trek was a “reboot” in the truest sense of the word, taking an occasionally fusty, often cerebral (by pop culture standards) franchise and turning it into a shiny, slick modern blockbuster, for better or for worse.  Abrams doesn’t have anything so radical in store for his much-anticipated sequel, Star Trek Into Darkness; in fact, he offers much more of the same.  And while it’s certainly wise to refrain from fixing what isn’t broken - the consistency in Abrams’ direction and the cast’s performances help to construct a fully-realized version of the Trek universe that’s more welcoming to new fans - there’s also something to be said for taking a risk or two.

For one thing, there’s homage, and then there’s repetition.  The film’s script, penned by Transformers scribes Roberto Orci and Alex Kurtzman along with fanboy flashpoint Damon Lindelof (Lost, Prometheus), has trouble splitting the difference, at many times content to simply re-hash whatever worked in the previous movie.  After uber-straight arrow Spock (Zachary Quinto) inadvertently rats out co-worker Captain Kirk (Chris Pine) for breaking the rules and allowing a primitive alien civilization to get a glimpse of the Enterprise, their tenuous friendship is tested when the captain gets busted down a rank.  But there’s little time for discord after a terrorist with mysterious motives (Benedict Cumberbatch) declares a one-man war on Starfleet, launching Kirk, Spock, and the rest of the U.S.S. Enterprise crew into another galaxy-spanning adventure.

Star Trek Into Darkness zips along from setpiece to setpiece with Abrams’ usual flair (and flares).  He takes care to re-establish each key cast member and even introducing new ones - notably, science officer Alice Eve and Starfleet battleaxe Peter Weller - without overwhelming the audience.  Sprinkled throughout the nifty CGI-driven action are many clever small touches included for Trek fans and attentive moviegoers, and it’s heartening that the big opening sequence isn’t just for show and has emotional repercussions that unravel throughout the film.

Yet all the quirky character beats can’t obscure the fact that this Trek is a conventional summer blockbuster through and through, albeit one with a confused sense of purpose.  It’s impeccably constructed to reach the same broad audience as the first film, yet inexplicably and unnecessarily narrows its appeal about halfway through in something of an extended metatextual riff on Star Trek lore.  It’s difficult to discuss without spoiling the plot, but suffice to say it’s disappointing that the filmmakers seem unwilling to trust their own unique vision and retreat into the safety of nostalgia and brand recognition.  Star Trek Into Darkness is ultimately a fun, engaging thrill ride of a movie that will amuse Trekkies and non-fans alike.  But like a second ride on the same rollercoaster, it’s less exciting when you already have a good idea of what’s going to happen next.
Posted by Eric Ambler at 5:02 PM