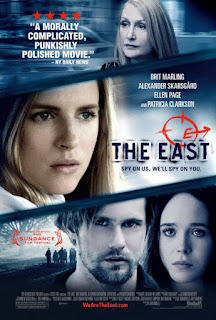 If there’s a big takeaway from The East, an eco-thriller from director Zaj Batmanglij and co-writer/star Brit Marling, it’s that the filmmakers have been reading the papers a lot recently.  Taking the “skeptical outsider infiltrates mysterious cult” angle of their previous collaboration, the excellent Sound of My Voice, and infusing it with a journalistic immediacy, The East is chockablock with material familiar to consumers of the 24-hour news cycle - corporate malfeasance, domestic surveillance, terrorism - and, more intriguingly, the readers of magazine trend pieces on intentional communities and the new anti-consumerism.  When Marling drops terms like “freegan” without the condescending need to explain what they mean, it’s clear that she’s done enough homework to resent having to regurgitate it for the audience’s benefit.

This is a good thing.  The East has an air of credibility that convinces us to go along with Sarah Moss (Marling), an operative at an espionage-for-hire firm, as she infiltrates the titular organization, a band of anarchists whose efforts to expose corporate wrongdoers become increasingly militant.  She locates the group just as they are preparing for a trilogy of major stunts - or “jams,” in their parlance - orchestrated by their handsome, charismatic leader Benji (Alexander Skarsgard).  Sarah begins to question the morality of her mission - and her fidelity to her nice-guy beau (Jason Ritter) - when she witnesses how Benji has organized various misfits and damaged souls into a type of surrogate family.  But she can’t ignore the darker side of his eco-friendly manipulation, compromising both the goals of her sternly maternal employer (a terrific Patricia Clarkson) and her new cult-y crush object.

The East embodies a similar quandary, applying a Hollywood thriller sheen to an offbeat project that sympathizes with the folks willing to bypass criminal justice and poison people to prove a point.  While the movie addresses certain issues embedded in its premise - Sarah rouses early suspicion for her, ahem, hygienic appearance - it is too reliant on dramatic convenience.  The East’s “jams” are constructed with a clever sense of irony that quickly curdles into pat moralizing, exacerbating the inconsistent character motivations in subplots featuring a doctor (Toby Kebbell) rebelling against the pharmaceutical company whose drugs gave him a permanent hand tremor (which still hasn’t stopped him from practicing medicine), and a prodigal daughter (Ellen Page) whose ping-ponging emotions contribute greatly to the film’s collapsing sense of verisimilitude.

The missteps extend to an epilogue that should have been left on the cutting room floor, a sequence that tries to provide the tidy - and frankly, far-fetched - answers that Sound of My Voice shrewdly avoided.  Batmanglij and Marling’s sincerity saves The East from appearing as a work of cultural tourism (the inspiration for the script reportedly came from the duo’s two-month stint as activists in the “Buy Nothing” movement), but as a dramatic interpretation, it’s still somewhat lacking.
Posted by Eric Ambler at 7:21 PM