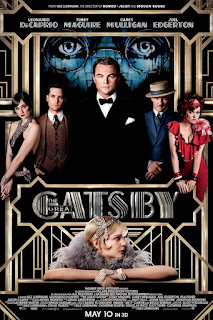 What makes a director a “visionary” anyway?  It’s a question to ponder after watching Baz Luhrmann’s boldly theatrical take on The Great Gatsby, a film that takes F. Scott Fitzgerald’s respected tome and molds its particulars to fit within the confines of Luhrmann’s cinematic hyper-reality.  And while the novel’s backdrop of material and emotional excess suits his mission - to make Gatsby a never-ending series of sensory highs to justify the “visionary” tag featured in the movie’s advertising - Luhrmann struggles to pick up on the more substantive concerns of Fitzgerald’s elegiac critique of the American Dream.  This Gatsby is executed with a glamour that never acknowledges the bitter irony underneath, dazzling us with the brilliant pop of a camera flashbulb while expecting us to ignore the blinding headache that follows.

A good example of The Great Gatsby’s many overwrought misfires appears right from the start, in an unnecessary framing device that sees the humble Midwestern narrator/observer Nick Carraway (Tobey Maguire) confined to a grim sanitarium as a result of his experiences from a single summer with New York’s idle rich.  His therapist encourages him to journal about his recent trauma, which stems from his role in an affair between former classmate and depressed trophy wife Daisy Buchanan (Carey Mulligan) and his enigmatic, fabulously wealthy next-door neighbor, Jay Gatsby (Leonardo DiCaprio).  Maguire’s ever-widening eyes capture the bemusement that Lurhmann is seeking in his cacophonous re-creation of the Jazz Age for the Tumblr era, but the anachronistic soundtrack - which makes great use of Lana Del Rey’s haunting “Young and Beautiful” while remaining embarrassingly non-sequitur at all other times, like cuing up Jay-Z whenever an African-American appears onscreen  - along with the cartoonish tone and hideous CGI effects undermine the more complex moral issues at play.

Several individual performances stand out among the ruckus, including newcomer Elizabeth Debicki as the wan, gossipy Jordan Baker and Joel Edgerton as Daisy’s philandering husband, Tom Buchanan, perfectly imagined as a violent, racist, condescending prick who’s nonetheless the movie’s smartest character, and the breakneck pace pays off in some unique sequences that recall the madcap genius of the Wachowski siblings' Speed Racer.  It’s telling, however, that most of Luhrmann’s successes are really Fitzgerald’s, a debt that dilutes The Great Gatsby’s “visionary” raison d’etre.  Not only do Luhrmann and co-writer Craig Pearce heavily sample Carraway’s voiceover directly from the novel, they also toss the words up on the screen as he’s tapping out his narration on a typewriter, literally translating Luhrmann’s stunning directorial vision into the experience of...reading the book.  It’s the wrong way to approach such a wonderfully-rendered tragedy - turning a literary benchmark into a vapid spectacle of overemphasis, always using an exclamation point when a period will do.
Posted by Eric Ambler at 8:46 PM