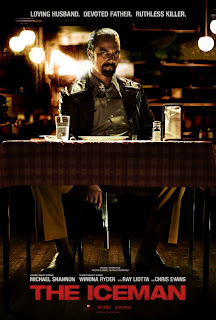 Making a Mafia movie requires a skillful managing of expectations.  Fair or not, these gangster tales inevitably face impossible comparisons with films that not only rank as the best of their genre, but the finest in all of cinema.  For its first 15 minutes, it seems as though The Iceman, written and directed by Ariel Vroman, is successfully mapping a path around the Godfather/GoodFellas monolith and through less-traveled territory.  The focus is not on an Italian up-and-comer, but a hulking Polish-American named Richard Kuklinski (Michael Shannon), a real-life mob hitman who was believed to have murdered more than 100 people from the mid-1950s until his arrest in 1986.  What’s more, he takes to his dirty work not because of familial or cultural ties, but because he’s a stone-cold psychopath -  as he casually slits the throat of a man who insults his fiancé (Winona Ryder), we’re aware that he’s been indulging a remorseless bloodlust well before he's paid to do it.

However, The Iceman struggles to separate itself from the pack as it goes on, becoming a rote story of Kuklinski’s double life as a ruthless contract killer and a family man in the Jersey suburbs who claims to make his living in “currency exchange.”  That's a decent template for a Sopranos-lite drama.  But it’s a set-up that relies on the gullibility of many individuals, something that Vroman fails to communicate adequately (he’s much more interested in the “murdering psycho” side of Kuklinski than the “devoted husband and father” side).  The result is a film that lives up to only half its billing, and one that cultivates a hokiness that’s mirrored in the way it skips across eras with hoary signifiers such as Shannon’s ever-evolving facial hair and an obligatory disco scene that’s scored to Blondie’s “Heart of Glass."

Indeed, The Iceman has the persistent feeling of a pre-packaged, shrink-wrapped nostalgia.  Things perk up when Chris Evans - failing to hide his beefy Captain America physique under shaggy, shoulder-length hair and ‘70s computer nerd glasses - swaggers into the picture as a fellow hitman operating out of an ice cream truck who takes Kuklinski as a partner when his mob connections sour on him.  It’s an entertaining development that also unfortunately highlights the movie’s wildly uneven tone - sober one minute, zany the next - served with distracting cameos from James Franco as one’s of Kuklinski’s sleazy targets and David Schwimmer as a ponytail-sporting lieutenant and surrogate son to Ray Liotta’s crime boss.

Liotta’s presence here only reminds the audience that The Iceman is the anti-GoodFellas, a stunted and bizarrely unconvincing exercise in exploring the world of organized crime through the perspective of one of its fringe players.  Still, there are the shreds of a minor epic here.  Vroman may lack chops but not ambition, and several individual scenes - such as a tense confrontation between Shannon and Stephen Dorff as Kuklinski's imprisoned brother, foreshadowing his sibling's fate - hit the right emotional notes.  It's just unfortunate that these moments are so few and far between.  Shannon rages appropriately, but The Iceman simply re-creates Kuklinski's default blankness to the point where the character's reaction to the protestations of one of his soon-to-be victims - "I don't feel nothing...not a thing" - starts to feel like a decent tagline.
Posted by Eric Ambler at 6:57 PM

Email ThisBlogThis!Share to TwitterShare to FacebookShare to Pinterest
Labels: reviews, the iceman