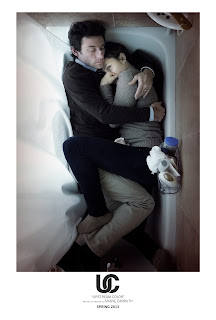 If I want to start unpacking Upstream Color, the new experimental romance from reclusive writer-director Shane Carruth, I probably shouldn't start with the pig farm.  I shouldn’t think how about the heroine, Kris (Amy Seimetz), is abducted by some sort of mad botanist/hypnotist and subjected to increasingly strange psychological experiments.  I shouldn’t wonder why she is suddenly serving as the donor of some type of organic material to an equally confused swine.  And I shouldn’t talk about how this is probably only the third or fourth most puzzling development in Upstream Color, and how it chugs along without a discernible sense of direction but, somehow, doesn’t traffic in misdirection either.  Carruth has borrowed the genetic material of several very different films and spliced them together accidentally on purpose, working from a blueprint that we are never allowed to see, but whose existence we feel wholeheartedly.

All of which is to say that Upstream Color - Carruth's first film since his micro-budget sci-fi mindbender Primer took Sundance by storm nine years ago - seems to nest in the audience’s mind as a perpetual series of awakenings, as if we were all like Kris next to that pig on that operating table, groggy and disoriented and transfixed by a single thought: What is happening to me here?  The one person who may have a clue is Jeff (Carruth), who finds himself drawn to a now-dejected Kris, and the film’s cycle of loosely yet deeply interconnected internal logic begins anew.  If you were to plot Upstream Color on a graph, it might resemble an upside-down bell curve, with the tipping point being the first moment Carruth cuts back to the pig farm to show us what could be interpreted as Jeff and Kris’ imagined domestic life as experienced by two livestock.

Often, a movie will be too transparent in its intentions and reveal that it has little or nothing to say.  That’s never an issue in Upstream Color.  Carruth definitely has something - indeed, many things - on his mind, but the way he tries to get these ideas across is just as important.  Carruth’s unexplained plot threads, elliptical editing style, and intensely visceral musical score establishes him as a disciple of Terrence Malick, making him part of a rapidly growing posse of American avant-garde directors entranced by Malick’s powerful use of intimation.

Yet unlike, say, Harmony Korine (whose Spring Breakers is still 2013’s most powerful example of pure experiential cinema) and others who use the style to demand attention, Carruth’s approach is decidedly low-key and focused on an unspoken area of human relationships.  He suggests that his characters are swapping parts of their consciousness as they share curiously identical memories and extemporaneously trade sentences from Walden, the same way that the film metes out information that doesn’t immediately fit into the bigger picture.  Make no mistake, Upstream Color is a thought exercise solidly in the vein of Malick's audience-polarizing The Tree of Life, but to those who enjoy a movie presented in the form of a bunch of ideas rather than the another, conventional way around, it’s humane and enthralling - an oddly touching ode to love and nature, those two equally wondrous and terrifying things.
Posted by Eric Ambler at 7:33 PM