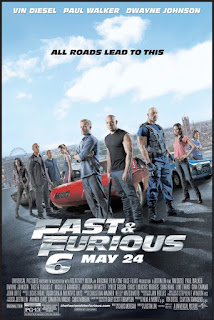 Here’s something interesting: each of the first four installments of the stalwart Fast and Furious franchise clocked in with running times well under two hours.  Naturally, they were built for speed, stringing together exhilarating action sequences with the vapors of a rudimentary thriller plot (though I’m partial to both the original’s savvy rip-off of Point Break and the high school shenanigans of Tokyo Drift).  Fast Five breached the 120-minute mark, though its shift to an Ocean’s Eleven-style all-hands-on-deck criminal romp partially justified the bloat.

It doesn’t take GPS to see where Fast & Furious 6 (dig that classy ampersand) is headed.  Using the success of Fast Five as an excuse to not trim the fat off Chris Morgan's tedious, overstuffed script, director Justin Lin winds up with a movie that's running on fumes halfway into his third dissertation on motors and the men and women who love them.  It picks up where Five left off, with Dominick Toretto (Vin Diesel) and Brian O’Conner (Paul Walker) living happily in exile in the Canary Islands and enjoying the spoils of their Rio heist.  Their former adversary, humorless government agent Luke Hobbs (Dwayne Johnson, looking like he’s about to burst out of his skin), contacts Dominick with an urgent request: he needs a crew capable of taking down another team of expert criminals/drivers led by a ruthless ex-soldier (Luke Evans) determined to sell sensitive military technology to the highest bidder.  Hobbs sweetens the deal with information on Dominick’s former flame Lettie (Michelle Rodriguez), thought to have died in a previous adventure but who miraculously survived - with amnesia! - and is now working for the other side.

Fast & Furious 6 covers much of the same ground as its immediate predecessor, only this time the novelty of a franchise roll call has worn off.  While Lin's scrupulous attention to series continuity is somewhat admirable, it’s also unnecessary - remember, this is a franchise that once had an installment where the only cast holdovers were the automobiles.  The film drags fatally in the middle, wading through cameos that will have most viewers reaching for their F&F appendices and wondering when the cars are coming back, and there’s nobody with the necessary charisma - save perhaps for the wry, perpetually snacking Han (Sung Kang) - to completely bring the movie out of its periodic doldrums.  (Having Ludacris and Tyrese Gibson as painfully redundant comic relief characters doesn’t help.)

Lin still knows how to direct an action sequence and plots a nice escalation of the death-dying vehicular chases, which showcase a welcome variety in equipment from armor-plated Formula 1 racers to tanks to jumbo jets.  But the movie’s trips into the realm of impossible physics are confused by the deadly seriousness of the scenes surrounding them.  They’re not all bad - Lettie and Dominick’s reunion is probably the sweetest thing I've ever seen in a Fast and Furious movie - but they can’t compare to the increasingly wild car stunts that are the series’ bread and butter.  Everyone is back, hooray.  Now, for God’s sake, let's keep it moving.
Posted by Eric Ambler at 7:07 AM