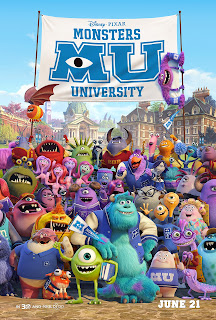 Is Monsters University the greatest movie prequel ever?  That may sound like I’m damning with faint praise (the competition is admittedly weak), but it’s really a testament to Pixar’s excellent grasp of storytelling where brand recognition is only part of a wholly satisfying meal.  Drop a couple bits of foreshadowing and Monsters University works wonderfully as a stand-alone story about the strange, inverted world of terrifying creatures dealing with the same insecurities that their  “victims” - the toddlers whose screams are a precious natural recourse in the monster world - will have to deal with once they get a little older.  Choosing the right vocation, fitting in with the right crowd, picking the right moment to disabuse (or support) a friend’s convenient self-delusions: these are the real things that make it difficult to sleep at night.

It’s several years before the events of Monsters, Inc., and future best friends Mike Wazowski (voice of Billy Crystal) and James “Sully” Sullivan (John Goodman) are rivals matriculating at Monsters University.  Their bickering - and the narrow-minded disdain of the aptly-named Dean Hardscrabble (Helen Mirren) - costs them their spots in the institution’s prestigious scaring program.  To earn their way back into the fold, they must set aside their differences and compete as teammates in an inter-fraternity competition that tests their aptitude in affrighting human children.  Monsters University prostrates itself at the feet of other classic campus comedies in the early going, a montage-studded amalgamation of typical undergraduate shenanigans.  But this being Pixar, it’s more Revenge of the Nerds than Animal House - especially when the film introduces the brothers of Oozma Kappa, a group of scene-stealing misfits galvanized by Mike and Sully’s fearless challenge to the supremacy of Roar Omega Roar, a smug jockocracy led by a scaly-looking version of Ted McGinley’s Nerds character with the haughty nasal lilt of Nathan Fillion.

Monsters is one of the wittier Pixar franchises, training a satirical eye on the bedrock institutions of work and education.  (Can Monsters Senate be far behind?)  Written and directed by first-time helmer Dan Scanlon with script assistance from Monsters Inc. scribes Daniel Gerson and Robert L. Baird, Monsters University leans heavily on the wry world-building of its predecessor, but it also succeeds as an example of economical storytelling, swiftly transitioning from one story goal to the next while filling the margins with brilliant throwaway gags and one-liners.  That wit may also prevent it from working on as many demographic levels as Pixar’s ironclad masterpieces.  The film’s reference points - 1980s slobs vs. snobs comedies and the actual experience of going to college - will be new to younger audiences, though adults will absolutely eat it up.  It’s possibly the first Pixar movie that serves as a legitimate gateway to an older, more “mature” cinema while simultaneously demonstrating how simplistic and sophomoric and bereft of real emotion that cinema often is.  Not just a great prequel but a great film, Monsters University refuses to take shortcuts, revealing new layers to familiar characters in clever and inventive ways, and earns its place in the Pixar canon without the need to grade on a curve.
Posted by Eric Ambler at 7:13 AM