Amblog and Friends: The Place Beyond the Pines

Welcome to "Amblog and Friends," a new feature showcasing special think pieces and deep analysis of movies from my Rolodex of fellow film lovers.  We kick things off this month with music and movie blogger extraordinaire Kenny Ng, who examines Derek Cianfrance's episodic morality play The Place Beyond the Pines.

The Place Beyond the Pines (2013)
Dir. Derek Cianfrance

"He's my son, I should be around him. I wasn't around my dad, and look at the fucking way I turned out. I want to take care of my son, that's my job. Let me do my job."

In one of the early, and more affecting scenes in The Place Beyond the Pines, a picture is being taken in front of an ice cream parlor. An unconventional family is united for a moment with the timelessly retro image of childhood as Luke, the character played by Gosling (Just Gosling) tells the girl taking their photo to "just capture the mood"—an instruction that can be attributed to much of film's goals as a whole. This particular scene also most closely revisits the hyper-present, suggestive intimacy that constructed so much of director Derek Cianfrance's 2011 breakout, Blue Valentine. This sequence is paired directly next to a scene of irrational crime, the tender and violent played side-by-side, jolting awake feelings on the dual nature of human life—a technique used to similar effect in his last release.

Visual symbolism is integral to the film, as when Luke, the handsome outlaw, arrives at Ro's (Eva Mendes) house in head-to-toe white, greeting the mother of his child mounted atop a white motorbike, with platinum blonde hair that, upon closer inspection, plays on the nuances of his white knight as the antihero—shirt turned inside out, tags visibly protruding, arms covered in tattoos, and dirtied clothes beneath the whiteness of it all. The imagery works at the reduction of good and evil into the grey in which most of us actually exist. With the birth of his son, Luke becomes a careless drifter who's found a reason to stay, and all the choices he makes thereafter are to be the father he never had, to show paternal care the only way he knows how. Much of the film's first act passes as sketches, like flashes of memories being told through narrative hindsight. The jumpy dialogue and excessive fades seem to piece together a general context rather than exist as presently-unfolding story—it, you could say, just captures the mood. 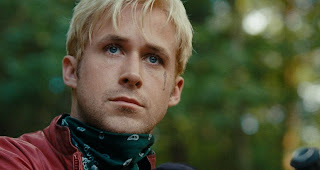 A shift in perspective opens the second chapter, featuring Bradley Cooper's Avery as a young cop carried over from Luke's story who is struggling with a newfound heroism that tests his sense of self, and continues to pose questions of personal context and motive. Through a series of wrong turns that stem from not really knowing his own limits, he becomes involved in situations he never wanted to explore. Avery, like Luke, has a newborn, and the characters act as mirrors for one another, using the conflicting roles of the criminal committed to his son and the paragon of justice with a shaky sense of morals to hint that beneath our well-formed exteriors, we are all a few bad decisions away from each other.

The conclusion of the police arc opens on a funeral, ushering the third and final portion of the film, with a time jump that completes the narrative set in motion by Luke's hypnotic opening scene. This is the most difficult section to talk about without infringing on the virtues of storytelling, but is also the most rewarding. Its focus is on two younger characters whose scenes together are ruthlessly tense, with a Shakespearean quality to a friendship built on the kind of easy camaraderie that you can't help but root for, however cursed it seems. Gosling is good, as is Cooper, but it's a testament to the framework of the story and direction that younger actors Dane DeHaan and Emory Cohen's time on screen is just as, if not more riveting. Though criticism of the film usually points to this last section, it is the very glue that ties all themes together—it is meant to be taken whole. 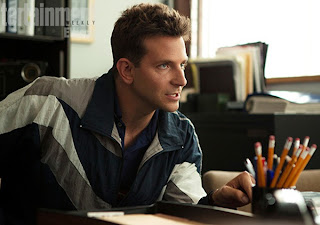 Cianfrance has a knack for stripping actors of their Hollywood facades, of digging deep to find what makes them human, and Pines is a film that works in spite of its big names, not because of it. The real star is its triptych structure, a balancing act of relentless plot and meditative visuals that push outside the lines of what we expect from a film of this kind, using its heightened reality to make ambitious connections. There is a pindrop intensity to the film that experiences moments of humor and terror with equal delicacy. It is completely insulated in its uncompromising, literary vision. Each frame affects the next, and builds from the last. There is a novel-like satisfaction to its completion, the closing of a whole that rides it out until the very end.

This is a film full of conflict, of forces that are constantly pulling at each other—even the score by Mike Patton floats between the peaceful oneness of human life, and the horror in what we do to attain the things we all want, when we don't know how else to get it. It puts forth questions of crime into a human context, and deals with moral ambiguity and the idea that really, everybody has his reasons. It's about what the circumstantial contrivances reveal about family, about legacy, about human nature; of a father's duty to his son, and a son's magnetic pull to his father. What do we inherit at birth and what do we pass on when we give life?

The final shot, coupled with Bon Iver's "Wolves" (the same song used to similar heady effect in last year's Rust and Bone), is both moving and haunting, tying together the film's themes of inherited fortune and circular fate, and the question of destiny in our DNA. It comes as a purging of all the pain, a final exhale for the viewer after a windswept two-plus hour motorcycle ride—equal parts fear and careless freedom—that could give out at any moment. As the credits rolled (it's the kind that you sit all the way through), I couldn't help but think back to the first scene of Luke in a motorcycle cage, spinning round and round and round, not going anywhere but looping back to where he started. This film is life, it is death, it is all of our choices in between.

Follow Kenny Ng on Twitter (@kennethjng) and keep an eye out for his new blog, coming soon.
Posted by Eric Ambler at 9:00 PM

Email ThisBlogThis!Share to TwitterShare to FacebookShare to Pinterest
Labels: Amblog and Friends, Derek Cianfrance, Kenny Ng, The Place Beyond the Pines