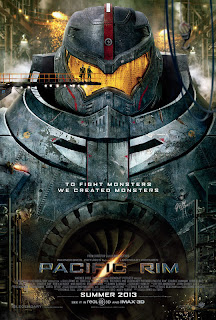 Calling a movie a “popcorn flick” has always been a kind of backhanded compliment, a friendly pejorative to describe the empty calories offered by less-than-intellectual cinematic experiences, as if we spent most of our free time consuming our cultural vegetables.  Pacific Rim is a special kind of treat, a movie that unabashedly embraces the identity of “popcorn” while offering something that’s increasingly rare in this age of convoluted, gritty blockbusters: functionality.  It delivers exactly what is promised, and does it with skill, panache, and a healthy dollop of humor.

A simple title card with two definitions is all that’s needed to construct the backdrop for the fulfillment of director Guillermo del Toro’s manga fantasies.  When giant alien monsters called Kaiju (Japanese for "great beast") rise from an inter-dimensional rift at the bottom of the Pacific Ocean to terrorize coastal cities, humans fight back by creating the Jaegers (German for "hunter"), skyscraper-sized battle robots steered by a pair of neurally-connected pilots.  Though the Jaegers are initially successful in repelling the Kaiju, the monsters eventually adapt, forcing the humans to decommission most of their machines and construct a series of defense walls instead.  The last remaining Jaegers and their pilots gather in Hong Kong, where military honcho Stacker Pentacost (Idris Elba) coordinates a last-ditch plan to end the Kaiju menace once and for all.

Our nominal hero, washed-up Jaeger pilot Raleigh Becket (Sons of Anarchy’s Charlie Hunnam, fighting a second battle with an American accent), leads the charge as he works his way back from a traumatic experience, seen in the film’s prologue, that took the life of his co-pilot brother.  Faster than you can say “Maverick,” he’s thrust into a character arc that bears an uncanny resemblance to the plot of Top Gun, just one of the old-school blockbusters from the ‘80s/‘90s golden age of high concept that del Toro gleefully references here.  However, Pacific Rim is a movie for pluralistic times, and its depiction of heroism relies on a number of stock characters recast as a multinational fighting force, from the aforementioned Pentacost; to Becket’s new female co-pilot Mako Mori (Rinko Kikuchi); to scientist Newton Geiszler (Charlie Day), who provides insight into the motivations of the Kaiju along with some welcome comic relief.

But Pacific Rim is really the opposite of a serious movie, using blunt, effective storytelling to slam subtlety like it's the ugly mug of a rampaging Kaiju.  Its the reliance on the tried-and-true allows del Toro and co-writer Travis Beacham to move quickly from one spectacle to the next, making it easy to forget any missed beats in the film's two hour-plus runtime.  And, oh my, is the action ever spectacular.  This is the cinema of the awesome: king-sized battles that resemble the embiggened monster fights of Power Rangers on steroids (and a major studio budget).  Yet unlike the casual destruction featured in many of this summer's releases, del Toro has given thought to how the external world is affected by this apocalyptic threat, from the people who worship the Kaiju as slate-cleaning world destroyers to black marketeers like Hannibal Chau (Ron Perlman) who scavenge the monsters’ corpses for profit.  Pacific Rim may be purposefully trite and corny and out of fashion, but that’s precisely what makes it work.  It's the first (and, so far, only) humanist blockbuster of the year, an infectiously optimistic disaster movie about the ability of human beings to overcome their differences in pursuit of a common goal and embrace diversity as the solution to their greatest challenges.
Posted by Eric Ambler at 9:57 PM