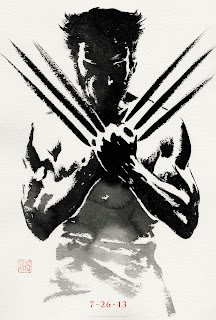 When Sam Raimi’s Spider-Man established the axiom “with great power comes great responsibility,” it created an unwritten rule: superheroes don’t deal with small problems.  Origin stories aside, they are protagonists with huge macro-level worries about saving the city, the planet, or the corruptible soul of humanity.  Surprisingly, the second Hugh Jackman-starring X-Men spin-off The Wolverine doesn’t really have anything to do with the greater good.  It’s a simple matter of life and death and the personal responsibility of its titular character, a genuinely character-driven story that’s a rarity in this era of the onscreen superhero arms race.

Indeed, the only arms (and torso, sneer, and sideburns) of note in The Wolverine belong to Jackman.  Counting his cameo in X-Men: First Class, it’s the sixth time he’s played the prickly mutant soldier Logan - known colloquially as “Wolverine” for the prehensile claws that protrude from between his knuckles - and his affinity for the role shines through in this standalone story following the character to Japan, where Logan is summoned by Ichiro Yashida (Haruhiko Yamanouchi), a man he saved from the atomic bombing of Nagasaki nearly 70 years before.  Yashida, now dying of cancer, covets Logan’s immortality and, somewhat insidiously, proposes a “transplant” that will allow Logan to age and die naturally while Yashida prolongs his own life.  But Yashida unfortunately doesn’t live to hear Logan’s answer, triggering an assassination plot against his handpicked heir, granddaughter Mariko (Tao Okamoto).

Here The Wolverine becomes an elaborate chase narrative with Logan protecting Mariko - and Mariko’s childhood companion, katana-wielding mutant psychic Yukio (Rila Fukushima), protecting him as he discovers that Yashida’s enemies somehow managed to suppress his self-healing ability.  Director James Mangold (3:10 to Yuma) constructs a thrilling game of cat-and-mouse while using the reverse-Highlander premise of mortal Logan to meaningfully explore the character’s pain and personal loss.  Yet for a film that is plenty dark - with its detailed depictions of nuclear warfare and Logan’s haunting visions of his dead lover Jean Grey (Famke Janssen) - it still finds room for kinetic action sequences (a fight staged on top of a bullet train ranks among the summer’s best) and a heroic arc that doesn’t feel rushed or perfunctory, thanks to the liberal sprinkling of character beats and the sudden removal of Logan’s invulnerability.

The Wolverine points to an intriguing “one-shot” paradigm for future comic book movies.  Given the super-sized cast of the next X-Men movie, it’s unlikely to metastasize anytime soon in this corner of the Marvel universe.  Still, Mangold and his team should be commended for demonstrating that the blueprint to an effective summer blockbuster can omit all the alien invasions and crumbling skyscrapers, and feature more of the moral rectitude and herculean burdens that actually define comic book heroism.  These days, any movie with a big effects budget has the power to become a large, clattering Doomsday Machine.  What’s admirable and ultimately memorable about The Wolverine is that it takes seriously the responsibility to find another way.
Posted by Eric Ambler at 10:12 PM