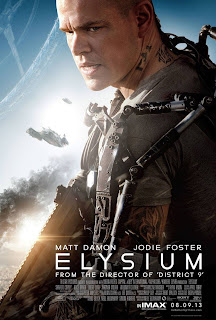 Elysium is the rare mainstream science fiction movie that actually has an agenda or three - not surprising, considering it's written and directed by Neill Blomkamp, whose excellent debut District 9 distilled decades' worth of racial politics into a gripping narrative about displaced E.T.s and the paternal abuse of the bureaucracy tasked with protecting them.  No, the most shocking thing about Elysium is that the bad guys score the most cogent points.  "I always wanted a wife" muses the film's most despicable baddie, a gleefully sadistic war criminal played by Sharlto Copley; it's the clearest statement of purpose in this admirable but jumbled sophomore thesis on social inequity and the benign neglect of the working classes.  Full of ham-fisted talking points delivered via clunky dialogue, it's a movie that often seems to be speaking at, not to, its audience.

Matt Damon stars as the questionably-named Max Da Costa, a resident of Los Angeles in the 22nd century, when the entire surface of the Earth is one big polluted, crime-ridden ghetto.  Those with means live on Elysium, an orbiting space station teeming with parks, robot servants, and magical MRI machines that can heal just about any physical aliment in the time it takes to order a coffee.  After Max is exposed to a lethal dose of radiation at work, he joins a group of criminals who use him as a vessel to steal valuable information from the brain of a one-dimensional corporate scalawag played by William Fitchner in exchange for a one-way ticket to the bourgeois paradise.  Unfortunately for Max’s travel plans, the mental download includes plans for a political coup headed by Elysium's scheming defense secretary (Jodie Foster), who will use any extralegal means to secure the data residing in his head.

Clearly, a lot of time and effort went into creating the world of Elysium.  From the literal distancing of the haves and the have-nots to the gradual merging of man and machine (Max's sacrifice to the cause includes having a powered exoskeleton fused onto his body), the forward-thinking Blomkamp attempts to unpack several movies’ worth of intriguing ideas - too many ideas, in fact, meaning that few of them receive a proper explanation.   The action - admittedly exciting in a janky, unpredictable way - overwhelms the message in the film’s second half, but by then the narrative itself has become so confused that a retreat to broad storytelling convention is a respite.  Despite its heady aspirations, Elysium is equal parts stentorian lecture and brainless summer blockbuster, a murky approximation of a trenchant allegory that at least speaks powerfully through its visuals, if not its lackluster drama.
Posted by Eric Ambler at 8:58 PM