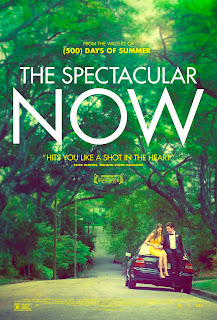 The soft focus of nostalgia always smooths out the rough edges of a bygone romance.  That goes double for teen romances like the one in The Spectacular Now, between popular party animal Sutter Keely (Miles Teller) and his sheltered classmate Aimee Finicky (Shailene Woodley).  Even though it takes place in the present day, director James Ponsoldt (Smashed) and co-writers Scott Neustadter and Michael H. Weber adapt Tim Tharp's novel in a way that suggests grown men attempting to iron out the wrinkles of the past - it's certainly not devoid of heartbreak, but it has an unfussy vibe that bends it closer to fantasy than a realistic examination of the challenges confronted by a messy, mismatched couple.

The spirit of Cameron Crowe permeates The Spectacular Now, which locates new sources of sweetness in the bad boy/nice girl love story trope.  Sutter is eighteen years old and already a maintenance drinker, packing a flask everywhere he goes, pouring it into giant 32-oz. cups of soda to keep his buzz going.  He's "100 percent serious about not being serious" and tries to inculcate Aimee with his live-in-the-now ethos.  While they rub off on each other in both positive and negative ways - Aimee quickly develops an affinity for the sauce - it's Aimee who takes the vapors of Sutter's blissful slackerdom and translates them into purposeful action, bringing his entire hakuna matata philosophy into question.

The Spectacular Now has enough charm to allow us to suspend disbelief to a point, like its claim that the luminous Woodley is invisible to boys.  However, the lack of verisimilitude becomes an issue once Sutter tracks down his deadbeat father (Kyle Chandler, playing marvelously against type) and begins a downward spiral that threatens to cost him everything.  Aimee in particular has the patience of Job; again, it's acceptable to a point for a shy girl in the initial ecstasies of True Love, but the film takes it too far into a gray area between understanding and abuse.

There's still plenty to admire about The Spectacular Now, which is a great credit to its cast and Ponsoldt's ability to replicate the improbably dreamy tone of Crowe's films (Say Anything... is the touchstone here).  Teller has an easy charisma about him and effortlessly pulls off a character who's loved by everyone and yet is close to no one: "You'll always be my favorite ex-boyfriend," remarks Cassidy (Brie Larson), his previous partner.  Unfortunately, Ponsoldt assumes too casually that Sutter will be our favorite rascal as well, and waits too long to give us a reason to believe in his redemption.
Posted by Eric Ambler at 6:48 PM