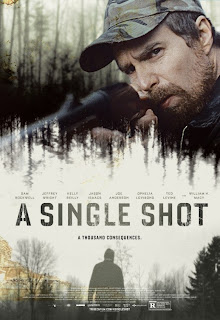 A deadly mistake begets even more bloodshed in A Single Shot, a twisty rural gothic thriller that begins with a mostly wordless 12-minute sequence of impoverished hunter John Moon (Sam Rockwell) stalking deer through the woods of upstate New York when he accidentally shoots and kills a young woman.  It’s a fatal miscalculation that sends John’s life ricocheting out of control as he discovers a massive wad of cash at the woman’s hidden campsite.  Believing that the money will convince his estranged wife (Kelly Reilly) to reunite their family, John decides to embrace this sudden windfall while covering up the accident.  However, his sudden fortune immediately arouses suspicion in his small town and attracts the attention of the vicious criminals searching for their missing loot.

A Single Shot is based on the book of the same name by Matthew F. Jones, who also wrote the screenplay, preserving a rigidly effective dramatic structure that director David M. Rosenthal rarely finds reason to deviate from.  That sense of restraint keeps the film grounded even as it threatens to tread into more hackneyed territory: the ordinary man forced to play vigilante detective; the hunter becoming the hunted.  Instead, Jones and Rosenthal focus on the tension between John’s kinder aspirations and the legitimate character defects that prevent him from achieving his goals.  In some ways, John is just as greedy and venal as any henchman of the backwoods kingpin (Jason Isaacs) calling for his blood, running the movie into a morally gray area as it unfurls the full consequences of his actions.

Still, there are times when the filmmakers fail to make these actions a compelling conduit for drama, settling for characters who mostly serve to provide insight into John’s obvious inner turmoil.  (The flirty farmer’s daughter serves who acts as a catalyst for his “good” side might just as wear a sign that reads “damsel in distress.”)  And Rosenthal can’t resist underlining his thesis, particularly when the town’s folksy lawyer (a wonderful William H. Macy) notes that it’s better for a man to be upfront about his misdeeds rather than find himself backed into a corner.  Luckily, Rockwell gives a transcendent performance that requires him to deviate from his slippery, motor-mouthed persona.  Quiet and relentless and direct to a fault, he embodies a kind of justice that A Single Shot suggests is beyond the boundaries of man’s law, instead located in the immutable laws of nature that judge even the penitent harshly.
Posted by Eric Ambler at 9:07 PM