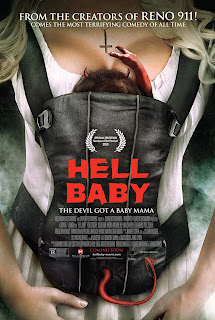 "I am so sick of being startled!” shouts an exasperated Rob Corddry in Hell Baby, a genuinely funny farce that lampoons the recent deluge of cookie-cutter demonic possession and haunted house movies.  From writing and directing team Thomas Lennon and Robert Ben Garant (Reno 911!), Hell Baby attempts to take its ribbing a step further than the surface-level parody of the Scary Movie franchise, tapping into the grey matter of horror clichés that, as the movie points out, aren’t so much scary as they are jarring and lazy.  Aside from the aforementioned jab at endless jump scares, there’s Corddry’s vacant wife, Vanessa (Leslie Bibb), who inexplicably begins to exhibit disturbing behavior as soon as the couple moves into a spooky New Orleans fixer-upper; a pair of dunderheaded cops (Rob Huebel and Paul Scheer) who have every reason to investigate the strange goings-on, but don’t; and a daffy local squatter named F’Resnel (Keegan Michael Key), who is well-versed in the house’s bloody history but whose only mystical knowledge is where to find the best po-boys in town.

The basic plot concerns two badass, chain-smoking Vatican operatives (Thomas and Garant) investigating “ver-uh wei-urd” religious phenomena around the globe.  They have reason to believe that the pregnant Vanessa is about to give birth to a hellspawn, and try their best to impress the gravity of the situation upon the father-to-be, who’s much too distracted by ancillary threats (like a possibly immortal and completely naked crone running amok through the neighborhood) to focus on more important matters.  That also could describe the movie itself.  Though its loose, lackadaisical structure allows for a greater variety of comic vignettes, it’s padded out with material that dilutes its satirical venom - at a certain point, the recurring “boo!” moments transform from clever meta-joke to the annoying dramatic crutch they are in serious horror films.

The lowbrow humor of Hell Baby is not for everyone, but its comedic reference points will certainly be comforting to its target audience.  The potential of its Adult Swim-meets-Scary Movie hijinks is realized thanks to its sharp cast, from veterans Lennon and Garant generating big laughs with mellifluous monologues equating the history of New Orleans with naked breasts, to the more absurdist Key nearly stealing the movie with his off-kilter line readings and aura of amiable menace.  After a saggy middle portion that often relies on the same tropes it’s lampooning - the less said about Riki Lindhome’s gratuitous nudity, the better - Hell Baby perks up with a finale featuring the long-awaited appearance of the titular bundle of terror.  Here the film finds the energy that’s been missing from of the preceding action: a little bit of inspired silliness and visceral catharsis that goes a long way in satisfying expectations that most parodies - and many horror films, for that matter - fail to meet.
Posted by Eric Ambler at 7:58 PM