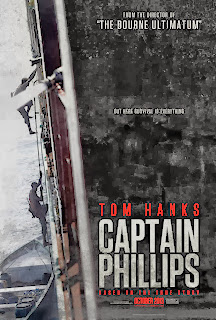 I can think of several reasons why Paul Greengrass’ Captain Phillips is billed as “from the director of The Bourne Ultimatum” instead of the more apropos, Greengrass-helmed United 93.  It sends the message that Captain Phillips is a white-knuckle actioner about a solitary hero that just happens to be based on a actual 2009 incident of piracy off the Somalian coast.  And for a while - and within the obvious physical limitations of star Tom Hanks - the movie is exactly that.  (Call it Man Overbourne.  Or, better yet, don’t.)

Rich Phillips (Hanks) is skipper of the Maersk Alabama, a container ship cruising a dangerous route around the Horn of Africa.  Phillips has willfully charted a course that leaves the Alabama miles outside of well-trafficked commercial shipping lanes and the relative safety of strength in numbers.  But when the worst-case scenario unfolds and four armed pirates board the ship seeking to hold it for ransom, Phillips leads his crew in improvising a defense, boldly defying their demands while trying to outwit the invaders.

It would be easy to turn the story of Captain Phillips into forgettable, inspirational mush, but Greengrass and screenwriter Billy Ray (The Hunger Games) are mostly uninterested in moral absolutism.  From its opening scenes, the film focuses equally on Phillips and the pirates’ leader, Abduwali Muse (Barkhad Abdi).  It’s a strategy that pushes the film towards a critique of the global economic system that drives the starving, desperate Somalis to commit high-seas hijackings.

Abdi is particularly fascinating in his acting debut.  He projects much more than the one-dimensional menace that a lesser film would require of him.  Here, he is a lowly link in an exploitative chain; his personal struggle for survival is tied up in pleasing his demanding bosses.  He’s also an intelligent foil to Phillips, a prickly taskmaster who’s prone to recklessness.  The standoff eventually moves from the Alabama to the ship’s emergency lifeboat with Phillips as a hostage and the U.S. Navy in hot pursuit.  It’s a recipe for a gripping thriller, made with Greengrass’ typical precision and featuring Hanks’ finest non-voice acting performance in at least a decade.

Despite the initial complexity of its moral shading, Captain Phillips ultimately wants to have it both ways.  While Phillips struggles to survive in the lifeboat and the pirates start to bicker amongst themselves, an efficient human story morphs into the climax of The Hunt for Red October.  We’re treated to breathtaking helicopter shots of advanced naval technology as the duel of wits and ideologies gives way to a re-affirmation of American military might.  (So much for haves and have-nots!)  But one can’t blame Greengrass for how it went down.  He still ends the film on an intimate, almost disturbing note, complicating a straightforward tale of uncommon heroism by suggesting that in-the-moment bravery pales in comparison to the everyday courage necessary to cope with lingering trauma.
Posted by Eric Ambler at 11:49 AM