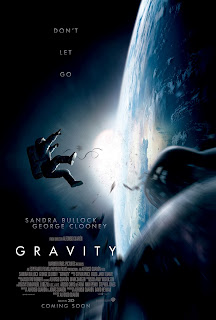 There’s a budding archetype in Hollywood films that I like to call the Librarian Action Hero, inspired by Diane Kruger’s character in the National Treasure movies who quickly transitions from National Archives bureaucrat to adventure-seeking daredevil.  In this character arc - which can be satisfying if handled well - increased physical prowess accompanies a sudden change in temperament, generally triggered by a bit of advice or impromptu training given by a more adept mentor.

Alfonso Cuarón’s viscerally thrilling Gravity, has its own Librarian Action Hero in Dr. Ryan Stone (Sandra Bullock), a technical specialist on her first space shuttle mission to fix the Hubble Telescope. Accompanying her is the jaunty mission commander Matt Kowalski (George Clooney), a grizzled NASA veteran with a suspiciously ample supply of Danny Ocean-style bon mots.  But Kowalski’s wisecracks give way to steely reserve when high-speed debris from a decommissioned Russian satellite turn the shuttle and the telescope into mincemeat, severing communications with Earth and stranding the two astronauts in low orbit as their oxygen supply - and chances of rescue - dwindles.

A few visual nods to classics like 2001: A Space Odyssey aside, Gravity is less sci-fi than desert island survival:  it’s Apollo 13 on speedballs.  Cuarón relentlessly tosses calamity after calamity at his heroes, testing both their will to survive and the limits of credulity.  I mean that last part in a good way.  Gravity may stretch plausibility to add stakes, but the dangers are more immediate, more easily understood.  Cuarón and longtime DP Emmanuel Lubezki pump up the visual razzle-dazzle (fans of the pair’s famously intricate long takes will be very satisfied) to construct the wildest amusement park ride of their imaginations.  You’re supposed to learn about space travel from this movie in the same way that a high school physics class is supposed to learn about momentum by riding rollercoasters.

Though Gravity carries some unexpected weight via Dr. Stone’s backstory, the movie knows it has certain limitations when it comes to character development.  I’m not sure if Clooney’s dead-on impression of a stereotypical ‘90s action slab, casually shrugging off every disaster, is meant to serve an ironic purpose.  (It’s also mentioned that Kowalski will fall just short of breaking the record for longest spacewalk, which is Gravity’s own spin on the “cop with only two days until retirement” trope.)  Bullock, however, is in full Librarian Action Hero mode.  To her credit, she elevates the label with a performance that’s as much about managing fear as demonstrating technical competence.  As a whole, Gravity is focused more on the latter, with Cuarón using his virtuosic visual technique to rattle the body and stir the soul.  It’s all the terror of the infinite void with just a touch of the majesty.
Posted by Eric Ambler at 9:06 PM