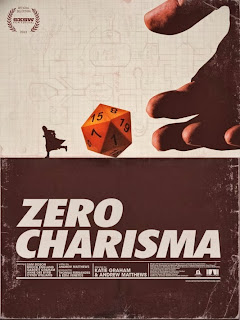 Geek culture has long since permeated the mainstream, but it hasn’t entirely eliminated the stigma from many obsessively nerdy pursuits: witness the indie comedy Zero Charisma and its evocation of the fantasy gaming subculture.  A self-lacerating ode to adult geekdom, the film stars Sam Eidson as Scott, the Game Master of a Dungeons & Dragons-like role playing game whose imperious approach to social situations frequently spills from the fantasy world into the real one.  But his illusion of control begins to crumble once Miles (Garrett Graham), an affable hipster nerd, joins the group and provides an easygoing alternative to Scott’s overbearing leadership.  Pretty soon he’s a shepherd without a flock, an indignation that isn’t helped by the sudden reappearance of his absentee mother (Cyndi Williams), trying to push Scott’s salty grandmother (Anne Gee Byrd) – who’s also his landlord – out of her house and into a nursing home.

Co-directors Katie Graham and Andrew Matthews wisely avoid sentimentality throughout Zero Charisma, refusing to shy away from their protagonist’s unpleasant nature.  Though beholden in some respects to the stereotypes of meek, sexless men huddled around a kitchen table pretending to be wizards and elves, the movie doesn’t totally bow to nerdic myths.  Scott is a hulking bully, a tempestuous metalhead who would sooner use physical intimidation and brute strength against his enemies than hide behind the anonymity of an Internet comments section.  And while Graham and Matthews are guilty of pattern repetition – Scott proclaims his worldview, reality intrudes on that worldview, Scott explodes with rage – they make an effort to explain the character’s behavior by hinting at the various reasons why he spends hours and hours in an imaginary realm that satisfies his quixotic desire for justice.  (“The gods demand retribution!” is his motto.  For what, exactly?)

Scott’s sense of fair play, however, is completely skewed, and the movie responsibly illustrates the consequences of his actions.  Zero Charisma follows in the footsteps of Robert Siegel’s Big Fan (another caustic character study of an incorrigible misfit) by couching any shred of redemption in hard-earned humility.  It’s one long, lonely journey to rock bottom for Scott, though his exaggerated hubris makes the heartbreak humorous enough to bear: a scene in which he claims that Hollywood plagiarized his ideas for The Matrix films is painfully funny, his ire escalating as his friends gently point out reasonable explanations for any similarities.

Graham and Matthew are also wise to include glimmers of hope, particularly in the film’s perfect ending, without upsetting their delicate balance of verisimilitude and comic embellishment.  Ultimately, Zero Charisma works so well because of its attitude toward self-acceptance, rejecting the idea of a sudden transformation, and framing life itself as one long campaign to accumulate experience and abilities that can make navigating the next adventure a little easier.
Posted by Eric Ambler at 8:13 AM