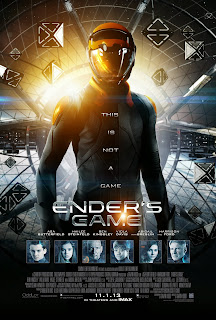 It’s not hard to imagine a blockbuster-style elevator pitch for Orson Scott Card’s seminal sci-fi novel Ender’s Game: In a future where humanity is always on the brink of war with an insectoid alien race known as the Formics, the most gifted child prodigies are bred to be the next generation of military commanders in a ruthless, hyper-competitive training program.  It’s Lord of the Files meets Starship Troopers!  In reality, Ender’s Game is much more nuanced – a beloved YA classic that’s more about warfare as a psychological state than as physical violence.  The long-awaited film adaptation, written and directed by Gavin Hood (Tsotsi), carries out its charge with as much gravitas as it can muster, while straining to reconcile the expansiveness and the introspection of the source material.

Asa Butterfield (Hugo) plays Ender Wiggin, a genius and reluctant warrior recruited by Colonel Graff (an appropriately grizzled Harrison Ford) to attend the prestigious Battle School, an orbiting boot camp for Earth’s prepubescent saviors.  The bulk of the film comprises the deliberately stiff and mechanical experience of basic training.  Though it’s meant to be dehumanizing, it’s still colder than it should be, and feels rushed and expository.  So much of the film’s success as an adaptation rests on Butterfield to guide the audience through an arc that’s highly internalized on the page.  However, Hood relies on a surfeit of mentors – including Graff, the matronly Major Anderson (Viola Davis), fellow cadet Petra (Hailee Steinfeld), and Ender’s empathetic sister Valentine (Abigail Breslin) – who spell out character development beats before Butterfield even gets a chance to do it.  (In one memorably frustrating scene – one of the film’s emotional centerpieces – Valentine literally finishes Ender’s sentences for him.)

Despite his shakiness with the actors – though most of the young’uns do improve as the film marches on – Hood delivers on the look and feel of a world where all institutions have been thoroughly militarized.  Contrast the bleakness of Ender’s spartan surroundings with the gorgeousness of the Battle Room, a proving ground that doubles as a cathedral to combat.  These tactical scenes are ironically the most thrilling and seductive in the entire film, underscoring the point Card was making about humanity’s competitive instinct, often presented with the justification of “survival.”

It feels strange to say, but Ender’s Game is almost kindred to Tom Hooper’s Les Misérables – obviously handcuffed by the limitations of the film medium to capture the full scope of the story while retaining its overall emotional impact.  Unfortunately, Hood shows little interest in breaking from convention, a decision that allows him to avoid the criticisms that accompany bold directorial choices but also minimizes his stamp on the project.  It’s practically the platonic ideal of an Ender’s Game movie, cleverly designed to appeal to a mass audience without alienating diehard fans, and smuggling just enough of the novel’s darkness and difficult moral quandaries within a slick, crowd-pleasing shell of genre cinema.
Posted by Eric Ambler at 8:07 AM