I try to see as many movies as I can, so sometimes I need to purge the queue.  In this edition: four films with strong authorial points of view on civil rights, masculinity, relationships, and...um...Disney World. 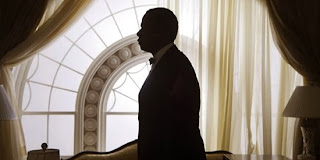 While “history is biography” no longer flies as a maxim in the academic world, the movies just keep on trying.  Case in point: Lee Daniels’ The Butler, a film that takes its inspiration of the life of an actual long-time White House servant and molds it into a Forrest Gump-esque journey through the African-American experience of the late 20th century.  Part family melodrama, part fabric-of-America saga, The Butler stars Forest Whitaker as Cecil Gaines, who rises from a traumatic childhood in the sharecropping fields of Georgia to become a domestic worker at the residence of the most powerful person in America.

The director of Precious and The Paperboy remains uninterested in subtlety, as Cecil eavesdrops on a succession of presidents from Eisenhower to Reagan (played by a variety of stars in supremely distracting cameos, though John Cusack makes a delectable Nixon), while his radicalized son (the underrated David Oyelowo) takes a Zelig-like journey through every crucial moment of the civil rights movement from 1960 to 1985.  It’s an overstuffed, frequently corny history lesson sprinkled with some truly powerful, emotionally affecting sequences.

That’s just another way of saying it’s unmistakably Daniels, bursting with ambition and passion yet hamstrung by several off-key moments and sloppy filmmaking - his idea of attention to detail is to put a Rubik’s Cube on the desk of a Reagan-era administrator.  The Butler is yet another Daniels film carried by its talented cast, but not even they can hide the movie’s significant flaws. 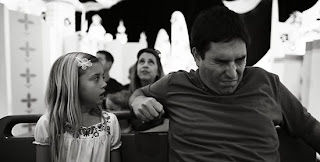 There's a lot of psychological baggage to unpack in writer-director Randy Moore's Escape from Tomorrow, a nightmarish farce of a family vacation gone awry.  Jim (Roy Abramsohn) is a middle-class dad accompanying his wife and two young children on a trip to the Walt Disney World Resort in Florida.  And while Jim is cast in the mold of Clark Griswold from the Vacation films - right down to his futile attempts to salvage no-win situations - he shares none of Griswold's chipper enthusiasm.  Jim's trip is a hallucinatory descent into family man hell, as his long-suppressed id begins to revolt against the stresses of fatherhood and marital fidelity.

For first half of the movie, it feels like Moore is intent on recycling tropes about the "dark side" of the Disney empire.  He revels in depictions of unwholesome behavior at the Happiest Place on Earth: Jim ignores his family to follow two nubile French teenagers around the park, succumbs to a temptress on a park bench, and gets embarrassingly shitfaced on a spin around Epcot Center.  It all builds to a bizarre interlude in an imagined secret bunker underneath the Spaceship Earth attraction, where it's finally made clear that Moore's agenda is much broader than a takedown of corporate conformity.

Moore filmed much of Escape from Tomorrow on Disney property in Orlando and Anaheim without the company's consent (some complex/objectionable scenes are achieved via unconvincing green screen), a fact that has generated praise for the sheer chutzpah of his guerrilla filmmaking style.  It's quite a feat, but it's not inherently impressive until Moore establishes a genuine emotional imperative for his efforts to achieve such realism.  The last twenty minutes of Escape from Tomorrow introduce themes that are both personal (drawing on Moore's memories of spending time with his father at Disney World) and universal (the psychic effect of a break from the "real world").  The location is not at fault; rather, it's the notion of indulging fantasies that distort our perception of reality, creating a disconnect that lingers long after the vacation is over.

Originally titled Don Jon’s Addiction, the movie’s romantic conceit is really a stalking horse for an exploration of sexual expectations in the digital age.  For someone with a résumé as diverse and idiosyncratic as Gordon-Levitt’s, Don Jon isn’t much of a curveball - this is still a world where female characters exist mainly to trigger the epiphanies of a male protagonist.  But credit JGL for his open-mindedness and sense of humor.  Jon is a man whose life is defined by a routine that starts off as faintly ridiculous (he counts off weightlifting reps by reciting that week's assigned Hail Marys), but it's not until he forms an unlikely bond with night school classmate Esther (a pleasantly warm Julianne Moore) that he recognizes the severity of his emotional disconnect.  It’s a simple message, but one told affably and with conviction and without castigating Jon’s other lifestyle choices - about what you’d expect from a nice, hard-working showbiz kid like Gordon-Levitt. 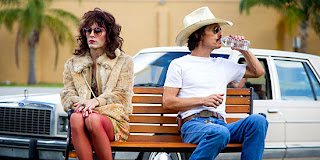 A frank yet earnest snapshot of the AIDS crisis, Dallas Buyers Club dramatizes the life of Ron Woodroof (Matthew McConaughey), a macho electrician, hustler, and part-time rodeo cowboy who, after contracting HIV at a time that it was still considered a “gay disease,” circumvented FDA regulations to obtain unapproved pharmaceutical treatments for the illness – first for himself, then for a community largely ignored or marginalized by the medical establishment.  Directed by Quebecois filmmaker Jean-Marc Vallée, Dallas Buyers Club repels treacle thanks to its setting – unmistakably Texan, but also indicative of the disease’s nationwide impact – and its mostly unsentimental tone.  The latter is attributable almost entirely to Woodroof, an indomitable and deeply flawed individual played in a bravura performance by a wiry, gaunt McConaughey.  Woodroof doesn’t simply want to survive, he wants to live, and his compelling struggle practically turns the film into a character study.

In fact, it may be preferable to think of Dallas Buyers Club that way instead of as a white heterosexual narrative of the early battles against ignorance and misinformation in the AIDS epidemic.  The movie’s portrayal of the gay community is by no means monolithic – Woodroof eventually partners with a transgender woman named Rayon (Jared Leto) to market his alternative remedies – but it’s stuck playing second fiddle.  There’s also the film’s distinct libertarian streak which, although unique, sets up a number of straw men to be blown away by the colorfully offensive Texan’s bluster.  The enemy is not only Big Pharma, but also doctors – save for one sympathetic physician played by Jennifer Garner – and government regulators loyal to a self-serving system that keeps individuals from seeking their own solutions.

Still, Dallas Buyers Club triumphs by focusing on the changes in Woodroof.  The disease precipitates a complete personal transformation, a motivation to learn more – about AIDS, about medical research, about the world (he becomes incredibly well-traveled for a guy who starts the movie in a trailer park), and about himself.  Like any good social issue drama, Dallas Buyers Club views controversy as a teachable moment: one that’s equally instructive for its characters and its audience.
Posted by Eric Ambler at 8:10 AM