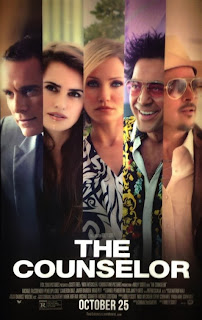 In recent years, “Cormac McCarthy adaptation” has become Hollywood shorthand for a specific kind of picture – a grim, morally slippery drama in the vein of The Road or the Oscar-winning No Country for Old Men.  Simplifying McCarthy’s oeuvre down to these two stories is unfair (and ignores Billy Bob Thornton’s 2000 version of All the Pretty Horses, a Western romance), but it’s likely to be etched in the minds of audiences watching The Counselor, so it may come as a shock that the film is actually a comedy…sort of.

Directed by Ridley Scott (the lifetime-pass veteran of Alien, Blade Runner, and, uh, Prometheus) The Counselor coincidentally marks McCarthy’s first attempt at adapting one of his own books for the screen.  It’s an uneasy combination of narco-thriller and black comedy that stars Michael Fassbender as a nameless lawyer who, in a bit of absurd metaphoric stubbornness, all other characters refer to only as “Counselor.”  Intending to settle down with his fiancé (Penelope Cruz), he simultaneously gets involved in a massive cocaine deal with drug lord Reiner (Javier Bardem), only to watch it slowly disintegrate due to the machinations of Reiner’s malicious girlfriend, Malkina (Cameron Diaz).

Scott and McCarthy take the movie to the brink of high camp but aren’t bold enough to go all the way.  Not all of the actors seem to recognize the potential for dark humor.  (Least of all Fassbender and Cruz, who fail to understand that repeated use of the word “Boise” will never be not funny).  Too often the joke is lost in quasi-philosophizing from characters like Brad Pitt’s Westray, who resembles a sort of Yoda figure for crime-curious yuppies, or in the graphic depictions of cartel violence upon which the story is constructed.  The movie is alternately somber, irreverent, and melodramatic.  That could be a recipe for an exciting new cinematic delicacy.  But it’s mostly a list of ingredients that end up overcooked.  (Only Bardem seems to be having fun, playing a weary clown who delivers loopy-yet-chilling monologues portending doom for other characters.)

The Counselor could be a critique for America’s continued naiveté about the War on Drugs, and how it’s foolish to think you can dismantle a machine with so many moving parts – or, in Fassbender’s case, seamlessly fit in without understanding how it works.  But that would be giving a thoroughly confusing film a lot of credit.  Like the Counselor himself, the movie wants to have it both ways, unsuccessfully blending lurid criminal violence and oddball satire.  The Counselor is only entertaining when at its shaggiest and only effective when it’s precise and deliberate – but, alas, it can’t be both at once.
Posted by Eric Ambler at 9:03 AM