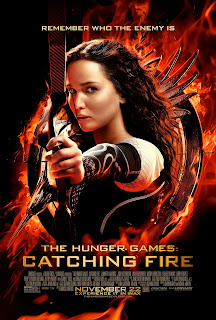 
The opening scene of The Hunger Games: Catching Fire effectively hits the reset button, as if to suggest that its predecessor was nothing but a bad dream:  Katniss Everdeen (Jennifer Lawrence) is back in the hardscrabble environs of her home, bow in hand, hunting illegal game for sustenance.  That illusion is shattered, however, when Katniss imagines one of her targets as a victim from the state-sanctioned deathmatch known as the Hunger Games, which she recently won by threatening to commit suicide with her fellow competitor and sham boyfriend Peeta Mellark (Josh Hutcherson).  She can’t shake the trauma, especially when life outside the arena proves just as ruthless as the dystopian bloodsport used to distract and mollify the masses.

Catching Fire benefits from a massive budgetary upgrade to expand the world of Panem, where the elite of the central Capitol exploit the labor and resources of their nation’s impoverished, far-flung districts, none more marginalized than Katniss and Peeta’s District 12.  But their romantic play-acting is interpreted by some as an act of defiance – the audiences on their awkward victory tour seethe with anger towards the government, pushing the country to the brink of rebellion.  Unwilling to make Katniss a martyr, the embattled President Snow (Donald Sutherland) and new game designer – wait for it – Plutarch Heavensbee (Philip Seymour Hoffman) devise their masterstroke: put Katniss back in a special edition of the Games, an “all-star” version that pits past winners against each other in an extravaganza that promises to eliminate the people’s idol, and earn boffo ratings.

Under the care of a new director (Francis Lawrence) and new screenwriters (Slumdog Millionaire’s Simon Beaufoy and Little Miss Sunshine’s Michael Arndt), Catching Fire surpasses the original in both narrative stakes and visual panache.  More really is more, especially when it comes to the Games themselves, which now include older, deadlier opponents and a constantly-changing arena that only heightens the players’ sense of hopelessness against the system.  The decadence and moral rot suggested by the first film is bolded and underlined here, a continued skewering of reality TV, manufactured celebrity culture, and audience manipulation.

That being said, there’s still a lot about this world that feels unnecessarily vague.  In confining its social commentary to the most general, shopworn slogans (have you heard the one about the bread and circuses?), Catching Fire foments a revolution in search of a metaphor.  This opening stretch feels longer and less novel than it did the first time around.  The film zips through a handful of convoluted subplots and political machinations that I suspect will take on a greater meaning in the planned sequels.  At the moment, it’s simply killing time before killing time.

Nevertheless, it’s still clear what The Hunger Games has going for it.  The star quality of Lawrence, who cycles through so many emotions from fear to despair to determination without losing the innate decency so fundamental to Katniss.  The visceral impact and suspense of the Games, introducing new wrinkles to quench the audience’s thirst for novelty.  The courage to clothe its grim self-seriousness in outrageous Capitol fashions and memorably silly phraseology like ‘Quarter Quell’ and ‘Jabberjay.’ (And, in case you forgot, ‘Plutarch Heavensbee’!)  Ultimately, Catching Fire follows an effective blueprint for a franchise picture: the basic foundation may be prefab, but it’s more than made up for in distinct and entrancing personal accoutrements.
Posted by Eric Ambler at 6:06 PM