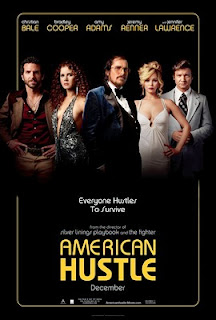 American Hustle begins with a title card that states "some of these things actually happened": it's a stroke of genius that simultaneously serves as a timely rejoinder to this year's glut of "based on/inspired by true/real events" films and announces the freewheeling tone for director David O. Russell's disco era costume drama.  Using the late-1970s Abscam scandal (an FBI sting operation that used a fictitious Middle Eastern sheikh to nab politicians taking bribes) as a jumping-off point, Russell and co-writer Eric Warren Singer concoct a frothy tale of deceit and double-crosses as the con man Irving Rosenfeld (Christian Bale) and his partner/lover Sydney Prosser (Amy Adams) are forced to aid in an entrapment scheme devised by reckless FBI agent Richie DiMaso (Bradley Cooper).  After the feds bust the pair for running comparatively petty scams, Richie smells an opportunity to advance his own career by using their unique skills to expose corrupt public servants trading political favors for cash.  It's a triangular story of professional compromise and romantic tension in the guise of a traditional crime saga, peppered with the type of shaggy, quasi-cynical humor that characterized Russell's last effort, Silver Linings Playbook.

But, befitting a story about confidence men, American Hustle is a film that only feels loosey-goosey.  In reality, it's a highly polished, meticulously plotted Hollywood machine, and that machine has three fine-tuned parts in the three stars of Russell's mini-repertory ensemble.  There's Cooper at his cocksure finest, mining the innate douchiness of his overreaching striver for maximum comedic effect; Adams as a steely-eyed operator rocking a wardrobe comprised entirely of garments that foreshadow Jennifer Lopez's infamous Grammy dress; and Bale, balding and paunchy, reveling in a schlubby charisma that makes his character easy to underestimate but impossible to write off.  Jeremy Renner and Jennifer Lawrence compliment the main trio as a well-meaning mayor and Irving's loopy, indiscreet wife, respectively, two characters that further complicate the results of Hustle's elaborate shell game with their unexpected candor.

Perhaps the greatest trick that Russell plays is convincing audiences that this is anything new.  Just as Russell's The Fighter clearly considered itself a spiritual successor to Raging Bull, American Hustle determinedly borrows everything that Scorsese didn't nail to the floor in Goodfellas.  Despite some unnecessary structural horseplay (a flash-forward opening that circles back around in about 15 minutes, voiceover narration delivered by three different characters), Russell is amazingly adept at re-purposing these elements into a breezily efficient and humorous package.  He somehow manages to both pay homage to and demystify the archetypes romanticized by Scorsese, as American Hustle is focused less on the traditional payoffs of the big heist or moral comeuppance than the petty character disputes between these crooked figures, who are more than a few rungs below the top of the food chain.  This is a movie where perhaps the biggest conniver, Richie, offers an explanation of his grandiose ambition to...his mother, whom he still lives with, while his hair is bound by dozens of tiny pink curlers.

As the FBI operation pushes the players deeper into a political skins game that eventually attracts a powerful and violent Mafia kingpin, it becomes clear that everyone is trying to punch way above their weight class.  The film's beauty ultimately derives from the tragicomic acceptance of its characters' limitations, communicated in loving detail through everything from the setting (Renner's clout is minimized by the fact that he's not the mayor of New York, or even Philly, but Camden, New Jersey) to Irving's elaborate grooming regimen.  American Hustle may be derivative in a macro sense, but it's definitely unique in it illustrates the pitfalls of upward mobility, drawing a distinction between the people who think they can control the entire chessboard and those happy to play a lesser role if it helps to satisfy their personal agenda.
Posted by Eric Ambler at 7:17 PM