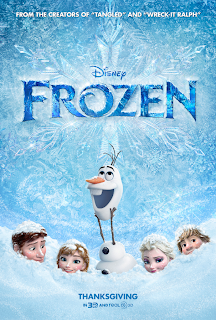 Fairytales are by nature didactic, but the storied Walt Disney Animation Studios appears to have learned some lessons from its competition in its latest offering based on a classic fable.  A loose adaptation of the Hans Christian Andersen tale “The Snow Queen,” Frozen finds the Mouse House steadily inching away from its tradition-bound heritage while retaining a sense of elegance.  It’s truly a hybrid of a film: an old-school cartoon musical (arguably the studio’s first since The Princess and the Frog) that crackles with the kinetic energy of a Dreamworks Animation picture and playfully subverts cinematic tropes like the upstarts at Pixar.

Frozen clearly aspires to be more like the latter, especially in the way it builds up one set of expectations only to wind up at a completely different destination by the story’s end.  The film takes place in a fictional Nordic kingdom where the royal heir, Ilsa (Idina Menzel), was born with the power to conjure snow and ice out of thin air.  A childhood accident involving her little sister Anna (Kristen Bell) drives their parents to keep Ilsa’s abilities a secret, isolating her from a world that’s unlikely to comprehend and accept her meteorological powers.

Ilsa eventually does accidentally send her realm into an eternal winter and, feeling distraught, retreats to an elaborate ice castle high in the mountains.  It is here that the buried lede finally emerges, as Anna embarks on a quest to coax her estranged sister back home while discovering that she’s even more sheltered and naïve than the sibling who rarely emerged from her bedroom for almost two decades.  Ilsa and Anna are atypically complex characters in a movie aimed at small children, a trait which screenwriter Jennifer Lee – part of the writing team for last year’s superlative Wreck-It Ralph – establishes early in the film’s exposition-heavy first act.  Lee also co-directed the film with Chris Buck, and together they delight in messing with the tried-and-true structure of Disney musicals: see Ilsa’s showstopping number “Let It Go,” which morphs the traditional “villain song” into a soaring affirmation of self.

Frozen is a very good film with flashes of greatness, notable for its unique emphasis on sisterhood and a healthy approach to the obligatory romance angle.  Anna has two love interests – the dashing prince Hans (Santino Fontana) and the humble ice seller Kristoff (Jonathan Groff) – but her arc is consciously feminist, and the movie offers comparatively mature instruction on love and relationships, setting up a palpable contrast in the musical score – compare the early bombast of “Love Is An Open Door,” with the demystifying “Fixer-Upper,” sung by a chorus of roly-poly trolls.  The film’s few sour notes come when it leans too heavily on the precedents of other, subpar animated films.  The comic relief character Olaf the snowman (Josh Gad) feels like a sop to the rambunctiousness of brasher franchises, and Disney is still struggling to establish a unique visual identity in the CGI era, as saucer eyes and smirks abound.

Yet Frozen is far from a tongue-in-cheek meta-fest – it’s a children’s film with the courage to take its themes seriously.  Continuing the work of Wreck-It Ralph, Frozen trades simplicity for growth capacity, creating an experience that will only grow more rewarding as its demographic ages and gains experience.  As it turns out, Disney is still devoted to the old-fashioned business of teaching life lessons, but Frozen is yet another sign that its pedagogy has finally entered the 21st century.
Posted by Eric Ambler at 9:03 PM