I try to see as many movies as I can, so sometimes I need to purge the queue.  In this edition: four holiday season films with year-end award aspirations.

Based on the best-selling novel by Markus Zusak, The Book Thief is the latest in a long line of films to filter horrific historical events through the guileless viewpoint of a child.  Here the tyke is named Liesel (Sophie Nélisse, last seen in Monsieur Lazhar), an illiterate orphan who suffers the misfortune of coming of age in Nazi Germany.  Parked with a new set of foster parents, Rosa and Hans Hubermann (Emily Watson and Geoffrey Rush), about a year before the German invasion of Poland, Liesel learns to read and write with encouragement from her adopted father as well as the young Jewish man (Ben Schnetzer) taking refuge in her basement, finding a refuge in literature amidst an increasingly bleak wartime landscape.

A staunchly middle-of-the-road World War II drama, The Book Thief hits all of the requisite beats on its deliberately-paced journey toward tasteful mediocrity.  Director Brian Percival (Downton Abbey) eschews literary affectation – save for the intermittent use of arch narration provided by the voice of Death (Roger Allam) – in favor of cloying moments signaled by the swelling of strings on the movie’s pedestrian score composed, shockingly, by none other than John Williams.  It’s a massive indictment of The Book Thief’s lightweight nature to have the man who created some of the most memorable film scores of all time reduced to yeoman-like status, not to mention the movie’s casual argument that the Holocaust was also a total bummer for the nicer Gentiles.  Though The Book Thief champions the lifelong pursuit of knowledge, its impact could scarcely be more superficial or ephemeral.

Slyly concealing a social issues exposé within a cocoon of mismatched-pair humor, Philomena tells the inspired-by-true-events story of the eponymous Irish woman (Judi Dench) searching for the son she bore as a teenager in the 1950s and was forced to give up by nuns who ran a kind of penitence sweatshop for young, unwed mothers.  She’s aided in her quest by Martin Sixsmith (Steve Coogan), a former “hard news” journalist and recently sacked government adviser who considers Philomena’s puff piece a necessary evil on his journey back to relevance.

Despite his many charms, Coogan – who co-wrote Philomena with Jeff Pope – is not the typical comedian that films are built around.  Though he’s portraying a version of a real person in Sixsmith, there’s still a healthy dose of his ferociously intellectual and perpetually jaded character from The Trip, another road movie where annoyance and jocularity are often intertwined.  There’s definitely more sweetness in Philomena, but Coogan and Dench don’t overreach for big emotional payoffs, reacting to the ever-evolving scenario like human beings instead of Odd Couple caricatures.  This subtlety pays off in the film’s surprisingly feisty climax as Coogan goes for the jugular of the Catholic Church, lending a strong editorial perspective to a well-constructed yet by-the-book heartwarmer.  It’s oddly comforting to see that a movie with class can have balls, too. 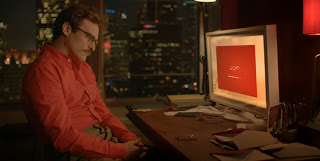 "Black mirror" is a catchy neologism - already immortalized in song and on television - to describe the screens, computers, and other iDevices that facilitate the human race's indulgence in cheerful solipsism.  Spike Jonze's technological romance Her takes that idea one step further, imagining a lonely man, Theodore Twombly, (Joaquin Phoenix) who falls in love with his new state-of-the-art operating system, sonorously voiced by Scarlett Johansson.

But within that catchy boy-meets-computer logline lurks something even better - a sharp satire of socialization in the digital age.  Though it doesn't share the structural trickery and absurd wit of his collaborations with screenwriter Charlie Kaufman, Her still finds Jonze pressing heavily against expectation with a vision of a near-future that's both thrilling (visit Los Angeles' extensive subway system!) and uncomfortably familiar. The film keenly reflects an era where personal information is mined by machines to create a virtual space that supersedes reality.  There's no great rhetorical leap to make when Her's sensitive protagonist crosses the last boundary of intimacy between man and computer.  Forty years ago, these topics would've been fodder for a dystopian thriller.  Now, it's simply amusing.

Alas, the concept loses a bit of its freshness over Her's two-hour runtime.  Jonze is as love-blind as Theodore, enamored by mannered production design and a quivering pace - minor flaws that parallel the intentionally humorous fallacy of the film's central romance.  The computer understands Theodore like no other human because she already is Theodore, programmed with all the data that betrays his needs and desires.  Still, Her is a unique film that truly captures the zeitgeist: a humane, funny, and touching exploration of how difficult it is to keep a binary relationship from turning into a one-way feedback loop.

Misery is company for the fighting Westons of August: Osage County.  Rare are the moments when two or more family members can kibbutz without emotions boiling over - light needling and gentle insults are about as nurturing as this brood gets.  So conflict is unavoidable after the sudden suicide of patriarch Beverly (Sam Shepard) forces his immediate family - led by his caustic, pill-popping widow Violet (Meryl Streep) and daughters Barbara (Julia Roberts), Ivy (Julianne Nicholson), and Karen (Juliette Lewis) - to assemble the clan at the family homestead in Oklahoma, where Violet's lowered inhibitions and fading sense of dignity prompts her to begin airing out decades' worth of dirty laundry.

Adapting his own work for the third time (after Bug and Killer Joe, both directed by William Friedkin), Pulitzer Prize-winning playwright Tracy Letts once again shows how adept he is at creating claustrophobic operettas of discord.  August: Osage County happens to be his most accessible screenplay yet, though it underlines the difficulty of mercy by refusing to sugarcoat the suffering of the Weston family.  (Much of that suffering is courtesy of Violet, whose chemically-induced state adds a hint of tragedy to her cruelty.)  Director John Wells mostly stays out of the way, letting the powerful source material speak for itself.  Streep is typically superb as the cornered Violet, but it's Roberts who shines brightest with her strongest work in years, combining righteous anger and tortured sympathy that perfectly suits the movie's level of Shakespearean dysfunction.
Posted by Eric Ambler at 3:11 PM