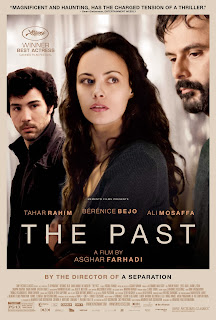 What’s the difference between a lie and a half-truth?  That’s the driving question behind Asghar Farhadi’s The Past, the follow-up to his Oscar-winning divorce drama A Separation.  While there’s no easy answer, Farhadi adheres to the same results-driven approach.  Whereas a lie seems more callous in its intentional deception, Farhadi argues that sins of omission can be just as damaging.  And when you start to see things through another person’s eyes, maybe it’s possible that there is no difference at all.

Events are set in motion by an inauspicious homecoming: Ahmad (Ali Mosaffa), an Iranian man, returns to France after a four-year absence to finalize a divorce with his ex-wife, Marie (Bérénice Bejo).  He re-enters her life at a chaotic time: Marie, who has two daughters from her first marriage, is now preparing for her third to the handsome dry-cleaning entrepreneur Samir (A Prophet’s Tahar Rahim), who has a troubled young son of his own.  Though Ahmad is preternaturally understanding and compassionate, he starts to question everyone’s motives when Marie’s eldest daughter, Lucie (Pauline Burlet) and Marie herself reveal information that threatens the tenuous peace within this blended family.

Despite the early focus on Ahmad-as-superdad, The Past slowly reveals its greatest strength: the ability to see conflicts from all sides.  Farhadi uses his empathetic eye to toggle between perspectives with great ease, deftly weaving a complex patchwork quilt of wants and needs that takes no character for granted.  Ahmad’s unlikely peacemaking is partially driven by guilt.  Lucie’s rebellious posture contains a measure of self-doubt.  Samir, at first an interloper, is more reluctant to let go of his past than his engagement suggests.  And best of all is Bejo as Marie, a woman whose life in a perpetual state of renovation, reflected by her house – a fixer-upper that she and Samir are attempting to remodel themselves – in an incisive, yet subtle, metaphor.

The Past shares many dramatic beats with A Separation, replicating its emotionally-charged conversations and its lockbox of secrets that still can’t prevent the truth from wriggling its way out.  It’s a film that respects its audience’s intelligence, asking us to re-draw the story in our minds as each new revelation causes a ripple effect on the tangled web of relationships.  The Past is also a bit laborious.  Farhadi is a relaxed, natural communicator, but the plot encroaches on what’s best conceived as a well-oiled kitchen drama, piling on the twists and turns until the gears start to grind. The film also surprisingly points to a scapegoat, though it ultimately fits Farhadi’s “family first” theme: those capable of hurting you deeply are still the same ones who know you the most intimately.  Even when they lie, there’s always part of them that wants to tell the truth.

This review was originally posted to Screen Invasion.
Posted by Eric Ambler at 11:48 AM

Email ThisBlogThis!Share to TwitterShare to FacebookShare to Pinterest
Labels: Asghar Farhadi, reviews, The Past