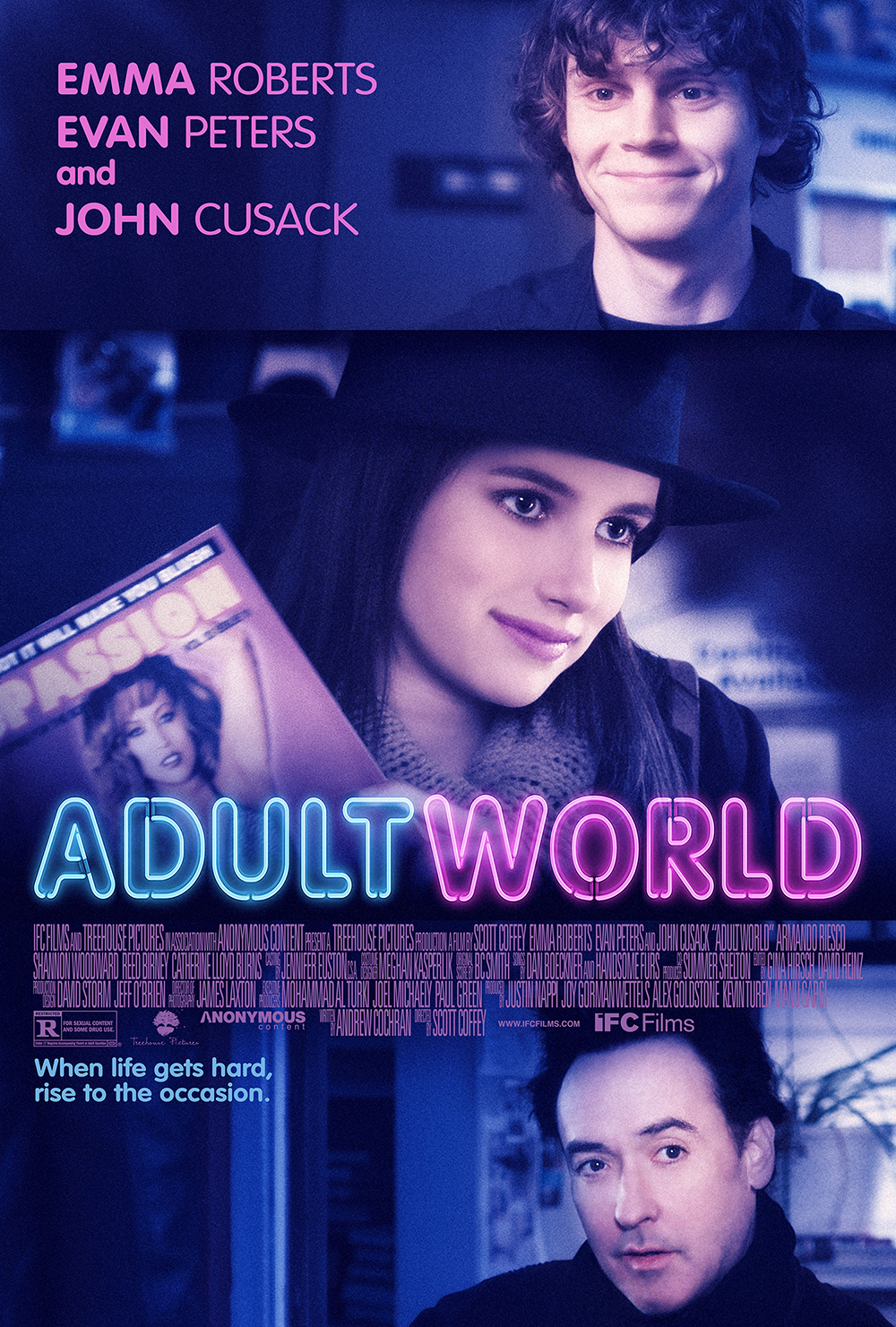 For recent college graduates like Amy (Emma Roberts), the plucky heroine of Adult World, the first steps outside of the ivory tower can be a jarring experience.  There's a sense of progress embedded in the path to a diploma, as well as an intoxicating finality that hides the fact that there's much more learning to be done before any goals can be achieved, if they're even achieved at all.
But while the title conjures up all sorts of ideas about life lessons and the cruel realities of the "real world," director Scott Coffey and writer Andy Cochran are relatively uninterested in a pat exploration of post-grad disappointment.  There's a distinct lack of comfort in Adult World's quirky portrayal of the teeming possibility and abject shittiness of being young and full of dreams.  Amy's dream is to become a famous poet, a noble career path but one that has left her with few employable skills as she struggles to carve out her literary niche.  Desperate for a way to pay the bills, she gets a job at an old-school porn shop ("Salinger worked at a meat-packing plant," she rationalizes) - a position that lights a path to personal and artistic liberation, but not necessarily in the ways you'd expect.
Adult World is spot-on in its lampooning of a certain breed of young strivers.  Amy develops a fixation on her favorite poet, Rat Billings (John Cusack), stalking him in the hopes of obtaining a mentor.  Billings is initially repulsed, then amused, and agrees to take Amy as his unpaid assistant while dispensing anti-motivational nuggets of wisdom like "Fame is your generation's Black Plague."  Roberts and Cusack's excellent chemistry bolsters the film's unique and honest exploration of an oft-ignored generation gap.  Cusack is particularly brilliant as a once-great mind gone to seed, his Gen-X apathy and cynicism clashing with Roberts' Millennial type-A tenacity and cheerful self-delusion.
The duo is so good, in fact, that the rest of the movie feels a bit undercooked in comparison.  The porn-store angle is poorly developed, aside from contributing some welcome sex-positive vibes.  Several supporting characters are cut-and-pasted from the indie comedy template, from the wacky transgender diva Rubia (Armando Riesco) who occasionally takes Amy under her wing, to Amy's sensitive co-worker and love interest Alex (Evan Peters), a nonchalant heartthrob who's perfect for the film's lukewarm romantic subplot.  And though Adult World tries is damnedest to recreate the loose, semi-episodic rhythms of real life, it's undercut by moments of embarrassing sitcom zaniness or inexplicable plot coincidences.  (Or sometimes both, as in a scene when Rubia and Amy chase Billings' car on a stolen two-seater bike that someone just happened to be riding...in a snowstorm.)
Still, the intermittent pressure to go broad can't ruin Adult World's charmingly low-key bonhomie.  Even its third-act twist, which initially scans as aggravating, is secretly brilliant as it finally brings the film's hilariously curdled view of artistic authority into focus.  While so much of growing up seems like an invitation to obey rules and follow a rigid plan, Adult World cleverly casts it as a tale of managed expectations.  Like Amy herself, the film is not as confident as it initially appears, but at least Coffey remains open and undaunted as he tries to shape his movie into what he truly wants it to be.
Posted by Eric Ambler at 8:52 AM