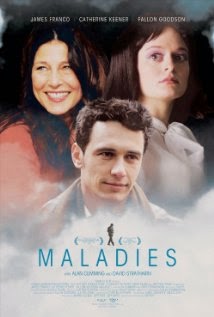 From 2009 through 2012, James Franco played a recurring character, a villainous conceptual artist named “Franco,” on the soap opera General Hospital.  The character was inspired in part by the New York-based conceptual artist Carter (neé John Carter), who in 2008 cast Franco as himself in Erased James Franco.  Now, we have Maladies, another feature film written and directed by Carter in which Franco plays James, a former soap opera actor slowly experiencing a complete mental breakdown.  Thus, Maladies doubles as an empirical proof of the Transitive Law of James Franco, with the actor playing a fictional version of himself playing a fictional version of his director.

Set in New York City in the 1960s, Maladies is a deliberately idiosyncratic art project that couches its quirks in the language of the social problem film.  A year after quitting his soap opera gig, James is struggling to finish a novel despite the life coaching he receives from the dryly academic voice inside his head (Ken Scott).  He lives with his friend Catherine (Catherine Keener), an artist who occasionally dresses in drag and acts as a warm, motherly influence on James and his sister, Patricia (Fallon Goodson), a near-mute adult with the emotional maturity of a preteen.  Flitting around the trio like a nervous hummingbird is their neighbor, Delmar (David Strathairn), a repressed homosexual with a thinly veiled crush on James.

Maladies establishes the trappings of a standard period melodrama only to defy them, delaying any sense of narrative momentum to instead focus on the laundry list of neuroses that afflict its main characters.  James in particular is a doozy, a delusional dreamer prone to petulant emotional outbursts that are quelled only by the soothing hum of a telephone dial tone.  Afraid that his book will remain unfinished, leaving the world bereft of his creative genius, he convinces Catherine to enter into a kind of artistic living will – if either one of them dies, whatever work they had in progress with be completed by the other.  In some ways, that’s a admirable sentiment.  It’s also an arrogant one, especially in the hands of a the self-absorbed James, who suddenly insists upon writing his masterpiece in Braille (helpfully pointing out to Catherine that, according to their pact, she now also has to learn to read and write in Braille).

As a filmmaker, Carter has a muddled approach.  Though he composes his frames with great care and attention to detail, they’re seemingly shot and edited according to his quixotic whims.  That’s sort of the point, as Carter achieves his goal of filtering the audience’s experience through James’ unreliable, unstable psyche.  But it also marginalizes some of the film’s would-be strengths, such as the performances of Strathairn and Keener.  The latter is, as usual, a quiet revelation, particularly in a diner scene where she harangues her surrogate children as well as a nosy stranger (Alan Cumming) about the hypocrisy of categorizing her drag fetish as an affectation that is safely mocked while far more troubling behavior like James’ is treated as a serious condition to be confronted and understood.

Alas, Maladies seems only intermittently concerned with such thought-provoking ideas.  Carter is far more enamored with the metatexual world he’s constructed (the director eventually pops up in a cameo as an NYPD cop), dumping a bunch of DSM-approved symptoms into the mix and trusting Franco to assemble the pieces into something profound.  But that just doesn’t fly in a willfully obtuse movie that paradoxically yearns for comprehension and human connection.  It’s almost beautifully tragic (“People don’t understand how sensitive people are!” bemoans James) but Maladies registers as a
frustrating exercise in experimental monotony – no mathematical proofs required.

This review was originally posted to Screen Invasion.
Posted by Eric Ambler at 9:15 AM