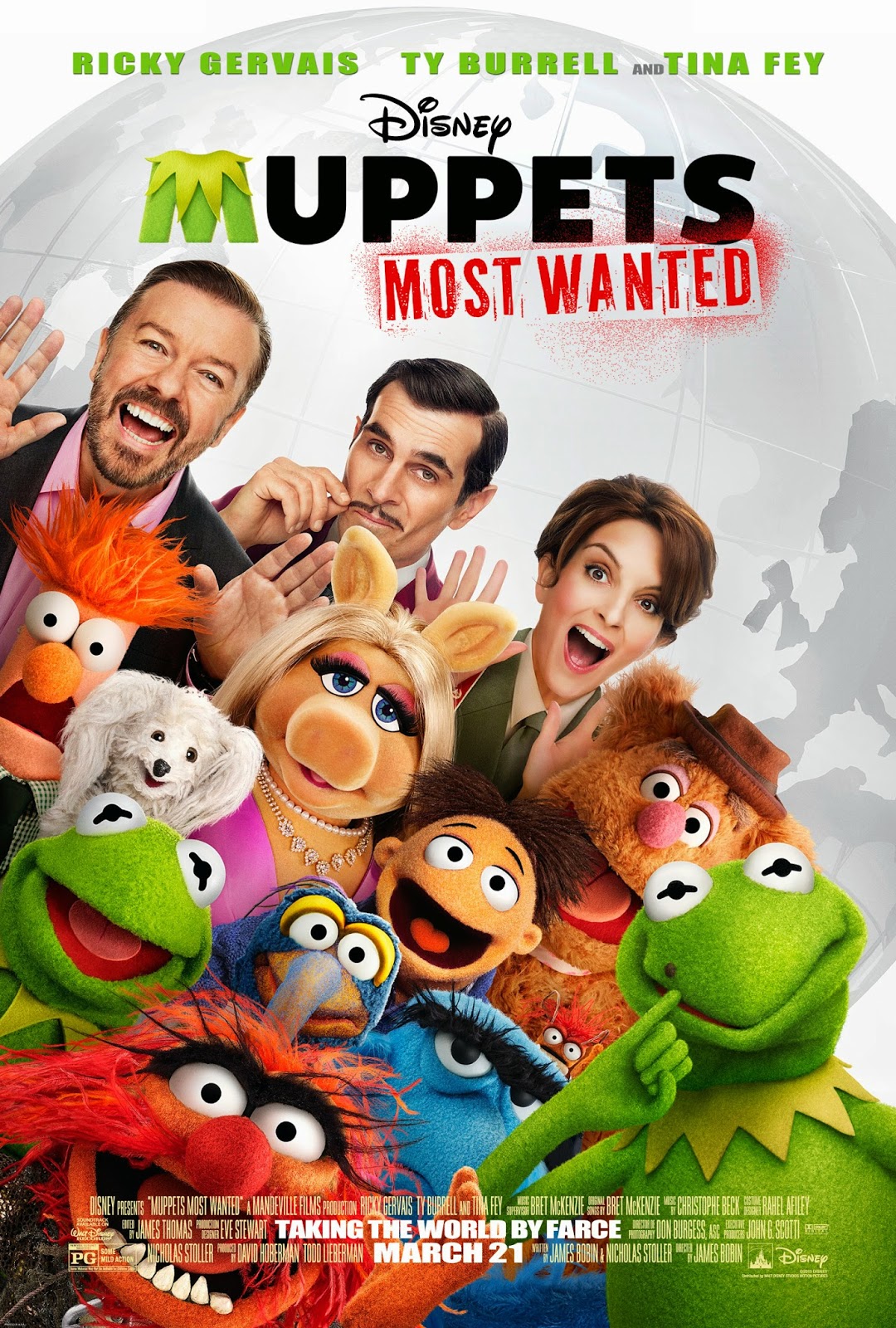 Muppets Most Wanted
Dir. James Bobin
4 out of 5
A good place to start with the Muppets is to accept the fact that they're not just characters, but an eclectic performing troupe that endures in spite of its many divergent personalities.  They've been able to put their comic spin on genres as diverse as the meta-road movie (The Muppet Movie), the heist film (The Great Muppet Caper), two different period literary adaptations (The Muppet Christmas Carol; Muppet Treasure Island), and even an anti-government conspiracy thriller (Muppets from Space).  The sooner you wrap your head around that, the easier it is to embrace the pleasures of Muppets Most Wanted, the cheeriest, zaniest, singing-and-dancing European caper/prison film ever to give top billing to an amphibian.
Muppets Most Wanted picks up immediately after the events depicted in 2011's The Muppets, as Kermit the Frog and friends grapple with the most difficult part of showbiz success: what to do next.  Heeding the advice of opportunistic manager Dominic Badguy (Ricky Gervais), the Muppets embark on a European tour.  But unbeknownst to the performers, the tour is merely a front for the criminal operation of Badguy and Constantine, a dangerous jewel thief who happens to look exactly like Kermit save for the conspicuous mole on his right cheek.  A switcheroo is pulled, landing Kermit in a Siberian gulag run by domineering female warden Nadya (Tina Fey), while Constantine not-so-comfortably assumes the mantle of the Muppet Show ringleader to evade pursuing Interpol inspector Jean Pierre Napoleon (Ty Burrell).
The introduction of Kermit's crotchety doppelganger is a masterstroke and one of the movie's many nods to the cinematic traditions of yesteryear.  Muppets Most Wanted has a buoyant old-school vibe that connects with everything from Busby Berkeley musicals to the Pink Panther series to the Muppets' own vaudeville roots.  The delightfully silly, wordplay-ridden songs of Bret McKenzie (whose Flight of the Conchords co-star, Jemaine Clement, appears in one of the movie's many celebrity cameos) enliven the proceedings, from the bouncy opening number extolling the virtues of sequels to Constantine's show-stopping disco ballad about irresponsibly indulging the egos of the entire Muppet ensemble.
Freed from the immense pressure of relaunching a beloved franchise, returning director James Bobin creates a more confident, coherent, and true-to-character film.  With the heavy expositional lifting out of the way, Bobin and co-writer Nicholas Stoller pack Muppets Most Wanted to the brim with free-flowing gags, in-jokes, and comedic bits designed to steal focus from the thinly-sketched plot.  But at least it's a plot that, unlike The Muppets, puts our puppet friends front and center.  The human co-stars nicely complement the action instead of overwhelming it, and the presence of Walter is more tolerable now that he's more of a team player than a Jason Segel surrogate/Muppet savior.  Like all superior Muppet projects, Muppets Most Wanted is a not-so-secret metaphor for collaboration and friendship, an appropriately optimistic romp through a rosy version of show business where anyone - even a pig, a bear, and a frog - can make it if they stick together.

This review was originally posted to Screen Invasion.
Posted by Eric Ambler at 8:36 AM