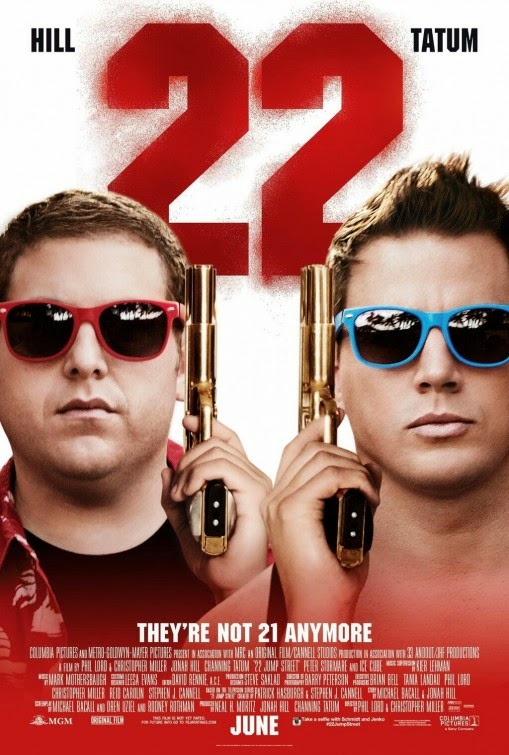 What a fine racket Phil Lord and Chris Miller have going.  With The Lego Movie, 21 Jump Street, and now 22 Jump Street - a sequel as riotously self-referential as the original - the directing team has established a basic formula for success: start with a familiar collection of genre tropes, then draw attention to said tropes as a meta-joke while still constructing the film around their inevitable payoffs.  It's like a spoof, but not quite: a self-affirming self-parody that not only anticipates the audience's incredulity, but also validates and rewards it.

It's a clever and extremely audience-flattering approach to storytelling, which is why I hardly even noticed the similarities between 22 Jump Street and its predecessor at first glance.  Yes, buddy cops Jenko (Channing Tatum) and Schmidt (Jonah Hill) once again screw up a narcotics bust and wind up in an undercover unit headed by the casually apoplectic Capt. Dickson (Ice Cube).  And once again they are sent to investigate the spread of a new designer hallucinogen at an academic institution, posing as students to infiltrate the drug's supply chain.  But this time, the filmmakers are so upfront about blatantly repeating themselves - the deputy police chief (Nick Offerman) sternly instructs them to "do the same thing" since the department has spent a fortune "to make sure Jump Street keeps going" - they immediately disarm the most obvious criticisms aimed at big summer sequels.

But is Jump Street doing itself a disservice by constantly making light of itself?  It seems like the film's main agenda is to acknowledge the cleverness of its one Big Joke, without directly acknowledging that there are viable ways to take sequels in a fresh and exciting direction.  Instead, story beats are carbon-copied:  Schmidt again awkwardly romances a girl (Amber Stevens) who's out of his league, and Jenko starts drifting from his partner after finding acceptance within a new social circle.  But the film's main agenda is to repeat its strategy of flattering audiences with inside jokes that play on our basic recognition of cinematic language and storytelling - even if it leads toward ridiculing the principles that undergird our enjoyment of most narrative artforms, namely the suspension of disbelief.

Ah, but let's not get too carried away.  22 Jump Street isn't a seminal critique of film theory - it's a delivery system for jokes about dumb jocks and ineffectual nerds.  Moment to moment, the movie is unquestionably funny, a testament to its terrific chemistry, strong comedic vision, and solidly superior schtick that's just as amusing the second time around.  That's a fine accomplishment in and of itself, and I don't blame the filmmakers for running back the formula that got them here.  In fact, it's quite democratic.  Because in the end, not only does 22 Jump Street give us what we expect, but also obliquely raises the question of why we want it in the first place, and you're free to enjoy it whichever way you want.
Posted by Eric Ambler at 10:06 PM