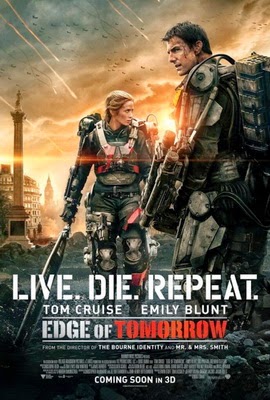 It'd be disingenuous to call Edge of Tomorrow our finest video game adaptation to date - for starters, it's based on the graphic novel All You Need is Kill by Hiroshi Sakurazaka - but it's hard to resist when the movie so cleverly emulates that artform in structure and function and affect, if not in source material.  Tom Cruise stars as Major William Cage, a military officer in a future where each nation on Earth is united in a war against invading alien lifeforms called "Mimics" that have conquered nearly all of Europe.  Far from a warrior, Cage is a slippery PR man whose patriotic duty is to sell the soldiering life as a glorious endeavor, driving up recruitment numbers to replace the mounting human casualties.  When he balks at a general's (Brendan Gleeson) order to personally cover the combat from the front lines, however, he's railroaded into service as a lowly private with little chance of surviving the humans' all-out amphibious invasion of northern France.

But a funny thing happens on the way to Omaha Beach.  The Mimics have anticipated the attack and draw the human forces into a horrific and costly ambush.  Inexperienced with the mechanized bodysuit equipment that enhances the combat abilities of each individual solider, a terrified Cage survives long enough to take out a rare species of Mimic - called an 'alpha' - and gets doused with its blood.  This xeno-fluid swap endows Cage with the ability to warp back to his past consciousness whenever he dies, forever resetting time back to the day before the botched invasion.  From here, it's Groundhog Day meets the first 20 minutes of Saving Private Ryan as Cage constantly repeats the day's events until he learns how to turn the tide of the war.

It would be easy for a film like this to use such a gimmick as a way to dress up yet another tedious and repetitive action blockbuster. On the contrary, Edge of Tomorrow happily embraces the energetic nonsense of its premise, enhancing it with unexpected bursts of humor while still maintaining an aura of mystery.  Its addictive qualities emerge as Cage enlists the help of Rita Vrataski (Emily Blunt), a tough-as-nails combat veteran whose legendary exploits were achieved with the same time-resetting abilities that he now possesses.  Rita transforms Cage from an awkward, flailing recruit (she has no qualms about putting a bullet in his head whenever he suffers grievous bodily harm during the intense training regimen) into a weapon that could single-handedly win the war; every day he gets a little bit stronger, smarter, and farther along in his quest, a gradual-reward structure that parallels the irresistible dopamine kick that audiences get from their favorite smartphone time-wasters.

Of course, a movie should be more storytelling apparatus than objective checklist.  While the script by Christopher McQuarrie and brothers Jez and John-Henry Butterworth provides a decent framework for the impressively taut action, Edge of Tomorrow is unmistakably formulaic, derivative not only of Groundhog Day but also movies like Source Code, sharing similar logical quagmires and even certain ending beats with the latter.  Fortunately, director Doug Liman is a visual slickster who keeps the film frothy and flashy without sacrificing tension, providing the appropriate jolts whenever it threatens to get too repetitive.  (In fact, he might have gone too far for the studio's liking - there is a conspicuous amount of offscreen violence in this PG-13 war movie.)  In video game terms, he's borrowed a great engine: Edge of Tomorrow provides an entertaining riff on a familiar time-jumping mechanic without fundamentally changing it and, like its protagonist, learns that mimicry, when executed well, can be mighty effective.
Posted by Eric Ambler at 9:06 PM