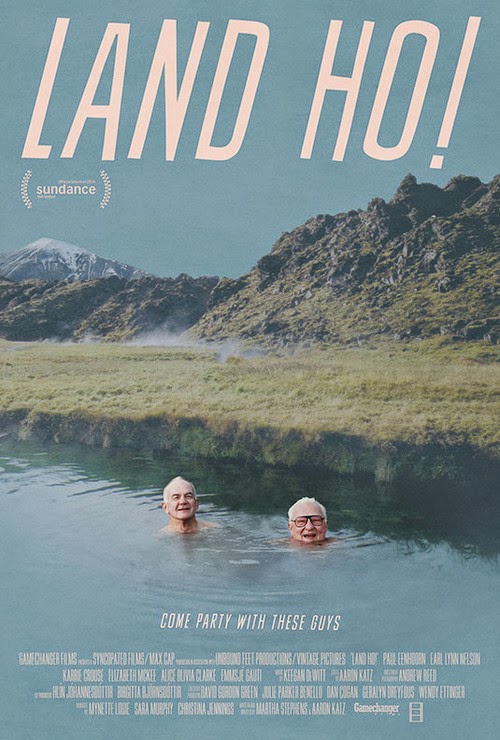 There’s more than a whiff of anthropological interest in Land Ho!, a road movie about two ex-brothers-in-law that’s part bonding exercise, part environmental study of seniors adapting (or, in many cases, not adapting) to unfamiliar surroundings.  When the wife of even-tempered Aussie Colin (Paul Eenhoorn), a former banker, passes away, his boisterous American relation Mitch (Earl Lynn Nelson), a recently retired surgeon, tries to boost his spirits with an impromptu vacation to Iceland.  Though the two men have not been particularly close since Mitch divorced Colin’s wife’s sister many years ago, they try to discover the potential of their friendship amidst the rugged beauty and stylish ultramodernism of their Nordic environs.

It’s quite fair to say that Land Ho! is really a vehicle crafted for Nelson, the real-life second cousin of co-director Martha Stephens.  Nelson’s Mitch is undoubtedly the highlight of the film, an incorrigible good ‘ol boy with a hearty appetite for T&A and red meat who’s also a pot-smoking libertine.  Whereas most people approach travel as a means to greet the world, Mitch is convinced that it’s the world that’s meant to meet him – even if he mostly ends up aggravating it instead.

And while the movie has a lot of fun with the classic mismatch of travel companions, it’s more entertaining to watch Mitch annoy others, from urging a couple of twenty-something Ph.D. candidates to wear more revealing clothing, to grilling a honeymooning couple about their sex life.  To their credit, Stephens and her co-filmmaker Aaron Katz don’t promote Mitch’s eccentricities and tactlessness as a statement on his age or his generation, nor do they pass judgment on him as a person.  He simply is.

That sentiment applies to the film as a whole.  Bits and pieces of the men’s prior lives drift into the story – concealed sadness, regret, and even depression signaling from across the gulf of their mutual misunderstanding – but the filmmakers struggle to develop the audience’s interest in anything beyond the surface of their relationship.  Land Ho! is precisely what it looks like, which is often a gorgeous Icelandic tourism ad, scored to dreamy synths and the heavily-rotated ‘80s pop hit “In A Big Country.”  More than once, the camera drifts away from Mitch and Colin’s conversations to take in another stunning panorama, as if Stephens and Katz are copping to the slightness of their well-worn premise.

But just because a movie aims for the center doesn’t mean it’s easy to hit the mark.  As crowd-pleasers go, Land Ho! is plenty lively and seeks an agreeable middle ground between caricature and nuance.  It’s a fizzy, fluffy film that nonetheless feels more substantial for its earnest assessment of lives in transition.  As it turns out, that recurring Big Country song is utilized perfectly:  “I’m not expecting to grow flowers in a desert/But I can still live and breathe and see the sun in wintertime,” it goes, a fitting anthem for the movie’s two eminently lovable heroes.

This review was originally posted to Screen Invasion.
Posted by Eric Ambler at 7:56 PM