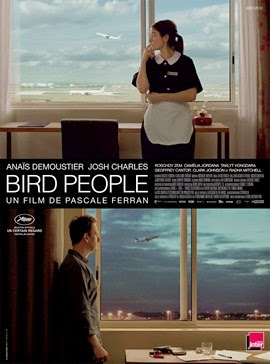 Movies can take us to unknown places, but they can also make familiar ones seem mysterious and powerful.  Bird People, which takes place in and around a hotel at the Charles de Gaulle airport in Paris, attempts to do the latter.  Gary Newman (Josh Charles) is an executive for a Silicon Valley firm in town for a meeting about a project he's scheduled to oversee in Dubai.  Audrey Camuzet (Anais Demoustier) is a young, lonely, and overworked maid at the Hilton where Gary is staying.  In real life, their relationship would be transitory or, at best, a transaction.  ("When was the last time you chatted up a maid?" snaps Audrey, after her father asks if she's meeting people at work.)  But in this film, the hotel has powers - some of them subtle and psychological, some decidedly shamanistic - that bring Gary and Audrey's lives into alignment in very unusual ways.
If I'm being too cagey, well, blame it on the film.  Its beguiling opening scene is an extended introduction to the workaday world of ordinary Parisians; director Pascale Ferran lingers on the internal monologues and conversational snippets of random individuals, as if she originally set out to make a documentary about rail commuters.  After briefly establishing the current state of their protagonists, Ferran and co-screenwriter Guillaume Bréaud split the film into two discrete halves: one focused on Gary's decision to ditch his responsibilities and start a new life overseas, the other revolving around Audrey's frustration with her socioeconomic limitations and her own desire for adventure.  However, their paths do not converge in the way that you'd expect.  Quite the opposite, in fact.  While Gary's story is conveyed with a strict - and sometimes plodding - realism that borders on the theatrical, most viewers probably couldn't guess what happens to Audrey and how it crystallizes her understanding of their shared aspirations.
Bird People is difficult to discuss without revealing the twist in Audrey's portion that changes the movie's perspective considerably, but it'll suffice to say that the experience improves considerably once it occurs.  Gary is not a particularly interesting or likable character on his own.  That's no fault of Charles, who delivers a fine, controlled performance, but rather Ferran and Bréaud, who take a rather sympathetic view of a mid-life crisis that leaves both his co-workers and his family out to dry.  To their credit, the filmmakers do spend the bulk of Gary's story showing him dealing with the fallout of his sudden course correction - featuring an intense and interminable Skype session with his wounded wife (Radha Mitchell) - though they also ensure that we know Gary is landing firmly on his feet, stock options in hand and ready for a long (perhaps indefinite) European vacation.
Unlike most dramas that feature characters with interlocking destinies, Bird People suffers from too little interaction between its principal stars.  There's no doubt that Gary and Audrey are connected in some meaningful, albeit vague, way.  But Audrey is asked to do all the heavy lifting, and her story expands in a way that makes Gary's seem almost inconsequential in a structural sense.  However, the themes illustrated in Audrey's half - about the yearning for freedom and the struggle for belonging - are too strong and too beautifully realized in quasi-nature documentary style for me to totally discount Bird People.  Ferran has mixed success in getting us to buy the movie's sense of cosmic kismet, but by focusing largely on quiet epiphanies, she's at least able to make her major curveball something more daring and even greater to behold.

This review was originally posted to Screen Invasion.
Posted by Eric Ambler at 7:46 PM