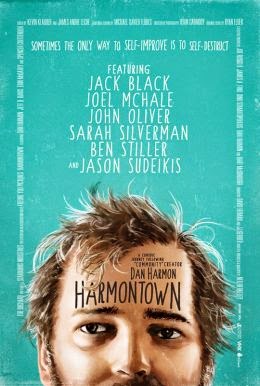 
There isn’t much that Dan Harmon, the creator of TV shows like Community and Rick and Morty, won’t reveal about himself, whether it’s mediated through his sitcom work or the straight confessional dope on various digital media forums.  So it doesn’t come as a shock when Harmontown begins its portrait of the mercurial artist as a slumbering man, softly snoring and wrapped up in bedcovers alongside his then-girlfriend (now fiancé) and fellow comedy podcaster Erin McGathy.  Still, as self-lacerating documentary exposés go, Harmontown – ostensibly a chronicle of the 2013 national tour of Harmon’s similarly-named podcast – is incredibly revealing.  It’s a punishing, hilarious, exhausting, and ultimately cathartic examination of performance and the hangover of introspection.

Harmontown picks up several months after Harmon was fired as Community’s showrunner at the end of its third season.  Despite prompt offers from CBS and Fox to develop sitcom pilots, he decides to pour his energy into a podcast tour that’s part therapy, part emotional exorcism.  Joining his cross-country trek are McGathy, podcast emcee/”comptroller” Jeff Davis, and superfan-cum-official dungeon master Spencer Crittenden, who runs the podcast’s ongoing Dungeons & Dragons campaign.

But, like Harmon’s groundbreaking television work, Harmontown quickly transcends the conventions of its genre to pick at sometimes uncomfortable, always fascinating truths about its subject.  For as easily as Harmon dazzles an audience with his towering intellect and spry sense of humor, he’s also stricken by stress and self-doubt, and lashing out at his comrades.  This is far from a vanity project.  Director Neil Berkeley and his crew pull no punches, juxtaposing gushing praise from his colleagues and fans with pointed editing – zooming in on Harmon’s bottomless glass of vodka, or following McGathy as she thanklessly pushes a merch cart through a cold Midwestern night.

One suspects that Harmon, with his strong anti-authoritarian streak and extra-sensitive bullshit detector, wouldn’t have it any other way.  Indeed, these warts-and-all moments establish a real sense of verisimilitude that can only be bolstered by response of Harmon’s fans.  If Harmontown were a conventional narrative film, Harmon would be neither the villain (that’s the tour itself) nor the hero (his audience), but the damsel in distress.  Indeed, more than the personal or professional struggles of its star – Harmon struggles mightily to finish one of his promised pilots while on the road – Harmontown is about the fraternal connection between an artist and his audience.

And it’s that audience that makes Harmontown such a special film.  Part of Harmon’s career thesis is about the necessity for communities that are safe for self-expression, and Berkeley shows how that idea has manifested in his fans’ intense identification with his nerdy, flawed, and resilient characters.  You can see a minor movement forming right before your eyes, one that rejects a phony stasis in favor of the peaks and valleys and discursive authenticity of individual lives.  If anything, Harmon should take heart in this – by not having anything to hide, he’s empowered people to not have to hide anything.
Posted by Eric Ambler at 10:14 AM