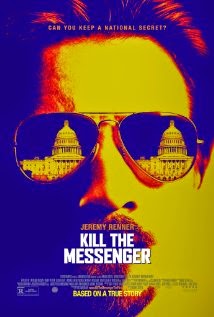 Kill the Messenger
Director Michael Cuesta
2.5 out of 5
Conspiracy theories endure because of humankind's need for narrative.  Scrub out all the details and randomness in a complex situation, and you can produce any explanation that satisfies your need to know what happened - what really happen.  However, conspiracy theories also endure because, sometimes, there's a bit of truth to them.  Kill the Messenger is a film about one of those times, based on the creation of San Jose Mercury News reporter Gary Webb's infamous "Dark Alliance" exposé, a bombshell piece of investigative journalism that linked the CIA's illegal funding of Contra rebels in Nicaragua with the Central American drug trade and sketched a line of government complicity through the crack cocaine epidemic of the 1980s.
It's an irresistible tale in the tradition of All the President's Men, although Kill the Messenger fixes its sights firmly on Webb himself, played by Jeremy Renner.  The film is not shy about its mission to canonize Webb, whom it categorizes as a motorcycle-riding bad boy, staunch family man, and brilliant journalist - not the mention the prototypical sane man in an insane world.  The film's embellishments are obvious - Peter Landesman's script features Webb and his eldest son in a motorcycle-restoration subplot, because a car would be just too cliché - but they complement Renner's gift for intensity.  He gives a rousing performance in a feature-length tribute to the dogged determination of reporters and a convincing argument for a truly free and substantive media.  In fact, the entire film is well-acted by a deep bench of supporting characters, though other than Webb's supportive wife (Rosemarie DeWitt), few are onscreen long enough to make a real impact.  This is Webb's story through and through.
However, that's where Kill the Messenger falters.  Good journalists get out of the way of their stories.  In real life, Webb posted all his source documents on his newspaper's website - revolutionary at the time - as if to invite the public to discover the narrative thread just as he did.  The movie's biggest problem is the lack of interest in unpacking some of the more troubling questions.  Kill the Messenger quickly turns into a star vehicle, eliding the more disturbing and discouraging parts of the story (most of Webb's downfall and tragic death in 2004 is conveyed through end title cards).  It's not a good sign when the most interesting parts of your film are montages of news footage; it's evidence that this is a topic that would be served just as well - if not better - by a thorough documentary.
Now, movies are not journalism, but director Michael Cuesta is ironically too dutiful.  Kill the Messenger has a strange relationship with storytelling technique; it reduces drama to Webb's editor (Mary Elizabeth Winstead) validating his risky move by calling him to say "You did it," and artfulness to literally showing the needle drop on a Clash record.  Kill the Messenger's mission to celebrate the work of a man who struggled to tell an inconvenient truth is admirable, but in doing so it turns him into a nearly-flawless, platitude-spouting myth.  The real Webb was eventually vindicated by the journalistic community through a rigorous reappraisal and an eventual appreciation of his actual journalism.  The movie version?  It could have used more vetting.

This review originally appeared on Screen Invasion.
Posted by Eric Ambler at 6:23 PM