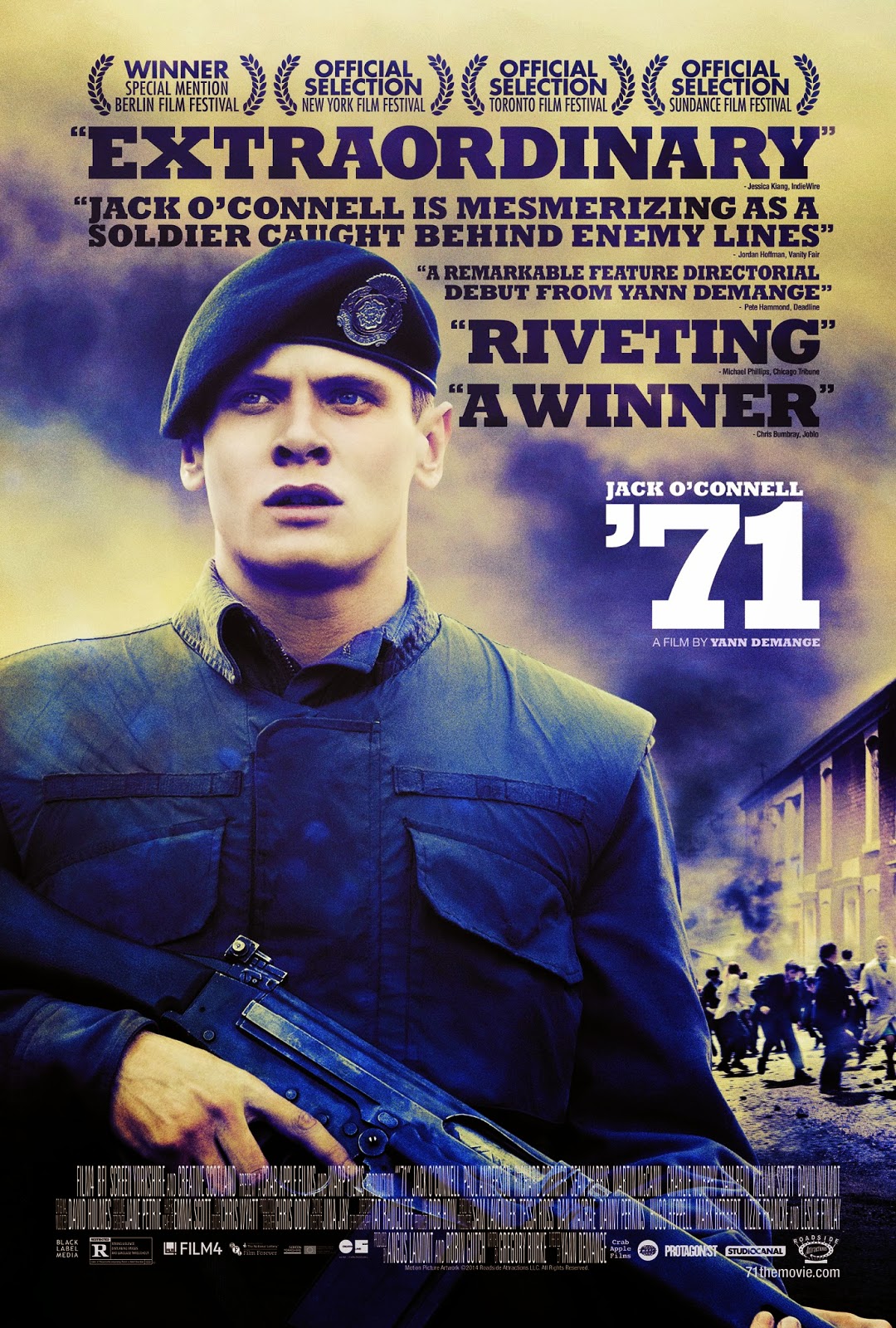 In the opening scenes of '71, Gary Hook (Jack O'Connell) is part of a regiment of young British soldiers training for their eventual deployment overseas.  But the action they see will not be far from home - just across the Irish Sea, in fact - as the soldiers are ordered to ameliorate the internecine conflict between Catholic and Protestant militias in Belfast, Northern Ireland, in the early years of what would quickly become known as the Troubles.  During his squad's first mission in the field, Gary becomes separated from his unit and embarks upon a dangerous journey through Belfast that exposes him to the ethical complexities and diverse combatants in this tangled sectarian conflict.

While Yenn Demange's film has an academic interest its many different factions vying for power in Northern Ireland - staunch Protestant loyalists, shady British military intelligence agents, and two squabbling groups of fiery IRA nationalists - it's ultimately about the corrupting nature of war in general.  Seen through Gary's relatively innocent eyes, the brutal violence is an almost apolitical byproduct of base human impulses that go beyond the immediate 20th-century concerns of government and religion.  Demange and screenwriter Gregory Burke aren't creating a historical document here - they are crafting a passion play within the structure of an urban action thriller, replete with stunning escapes, double-crosses, and unlikely allies.

Indeed, labeling '71 as simply a "war movie" belies its focused intensity and would muddle the broader message its creators are attempting to convey.  Its ideals are not glory or honor but a certain humanity - albeit a tragic one - that persists in some of the most hopeless situations.  On the other hand, the film's scale sometimes tips too far into the symbolic; the deeper Gary falls into his predicament, the more he functions as a plot point than as a character.  Demange also seems to squander '71's specificity in the characterizations of the supporting cast, whose motives either remain unclear or are spelled out in a somewhat clichéd language.  Still, '71 is absolutely captivating whenever lives hang in the balance and Gary is on the run - which is to say almost the entire time.  The filmmakers' general political ambivalence turns out to be a wise choice for the type of movie that '71 so frequently is: a tense, protracted chase sequence through a maze of crooks, charlatans, and collaborators.
Posted by Eric Ambler at 8:13 PM 5 comments: 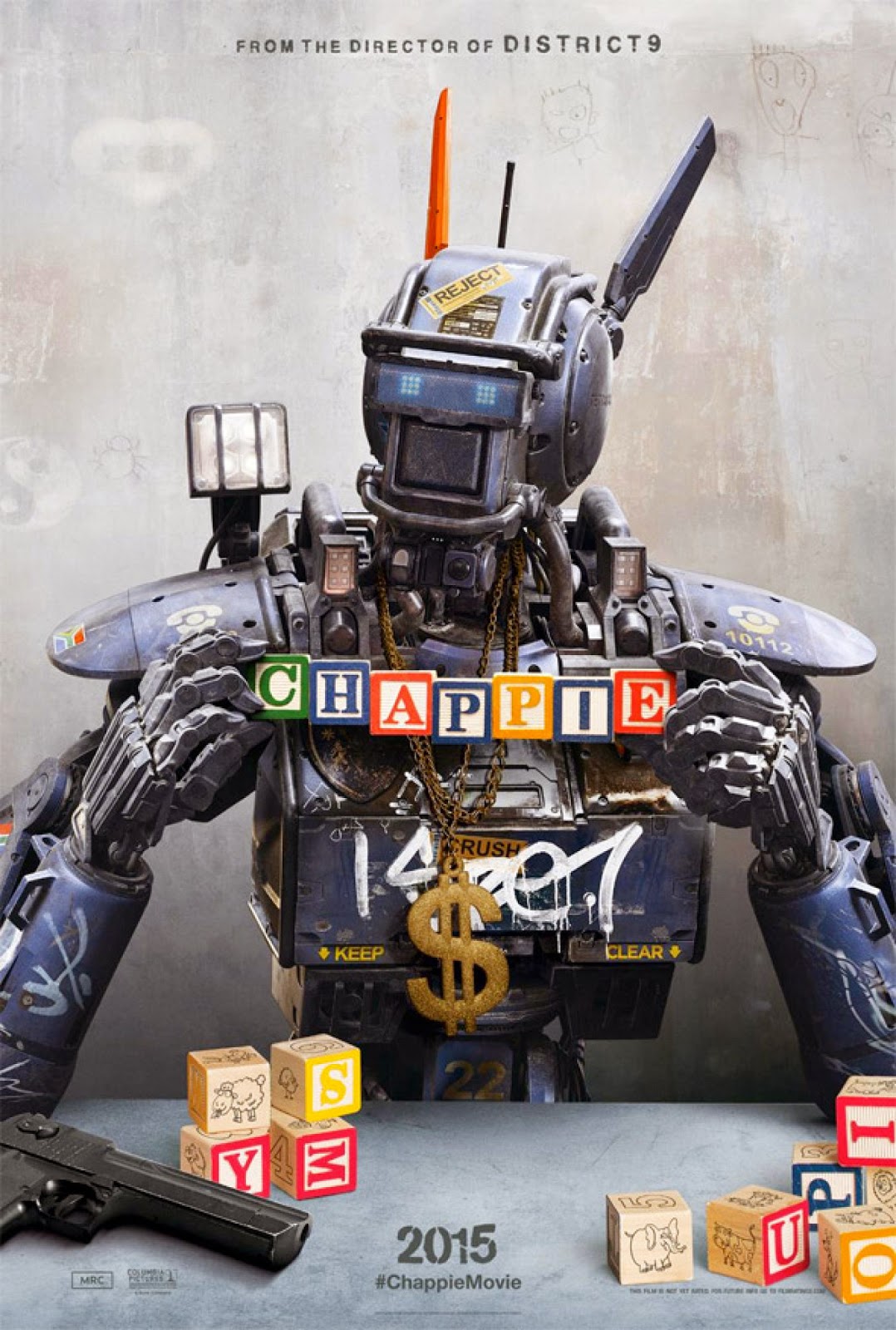 It takes a village to raise an automaton.  That's the most cogent takeaway from the sci-fi thriller Chappie, in which the architect (Dev Patel) of Johannesburg, South Africa's robotic police force uses a decommissioned machine to produce a sentient form of artificial intelligence.  But when the little guy, childlike and helpless, falls into the hands of some desperate street thugs, his development oscillates between the warm, compassionate wonderment supplied by his surrogate mother (who impulsively dubs him "Chappie") and his criminal exploitation at the hands of his father figure - played respectively by South African rappers Yolandi Visser and Ninja, better known as Die Antwoord.  Then there is the harsh, violent reality of Chappie's environment, where a stable urban society exists adjacent to a quasi-Mad Max wasteland, characteristic of director Neill Blomkamp's consistent predictions of a future starkly divided between the haves and have-nots.

Chappie, at its core, is not so different from Boyhood - if Boyhood also featured a beefed-up version of the ED-209 from RoboCop controlled by the thoughts of an ex-military hardass (Hugh Jackman).  The film's coming-of-age element maintains a critical emotional through-line within Blomkamp's loud, hyper-stimulated action aesthetic.  The tenderness and cute humor of Chappie himself - animated via the vocal and "poor man's motion capture" performance of Sharlto Copley - cuts through the static of an energetic but often hopelessly cluttered script.  Co-writers and real-life partners Blomkamp and Terri Tatchell have crammed enough ideas and subplots for multiple movies into Chappie, resulting in a film that feels disjointed for its first two-thirds, then hopelessly rushed once it's time to tie all the threads together.

But some of those threads, taken individually, can be quite intriguing.  Much like Ninja is obsessed with teaching Chappie all about the hard knocks of life in the slums - and the exaggerated macho hardness that's required to endure them - Blomkamp is preoccupied with the idea of authenticity expressed as coolness.  He's mashing up the worlds of Coachella and SXSW, alternating between the profanely-tagged abandoned rave site that is the criminals' hideout and the sleek, supermodern technocracy where Patel's and Jackman's characters are rivals jockeying for position in the pecking order of scientific and cultural innovation.  In the end, Chappie's own cinematic parentage is an amalgamation of Blomkamp's two previous films, Elysium and District 9; it's both a hopelessly confusing crackpot mess and a visually stunning work of ambitious social import.
Posted by Eric Ambler at 9:05 PM 1 comment: 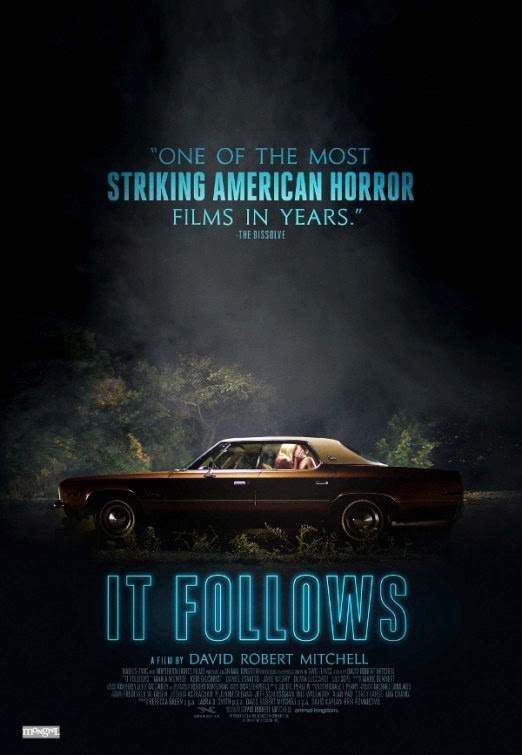 3 out of 5
We all know what happens to the sexually promiscuous (or even just the sexually active) in horror films: once the clothes come off, a grisly death usually isn't far behind.  The teen chiller It Follows, from writer-director David Robert Mitchell, magnifies this trope to movie size: after teenage Jay (The Guest’s Maika Monroe) sleeps with the older boy (Jake Weary) she's been dating, she's haunted by spectral visions taking the form of various people, often creepy-looking and disturbingly mutilated strangers.  Jay's lover has the courtesy to explain, post-coitus, that it's a condition passed down a long line of sex partners and that his only motive in courting her was to rid himself of the curse, as the visions will relentlessly hunt down and kill the most recent link in the chain.
It wouldn't take much to push this premise into exploitation territory, but Mitchell takes it in a more introspective direction, trying to examine the impact Jay's situation has on her relationship with her friends: younger sister Kelly (Lili Sepe), schoolmate Yara (Olivia Luccardi), bad-boy neighbor Greg (Daniel Zovatto), and childhood crush Paul (Keir Gilchrist).  Only the afflicted can see the visions, so they spend much of their time consoling Jay without knowing exactly why.  Jay herself is a fascinating character, contemplating the morality of her limited options in relieving herself of the curse.  Together, they all perform the duties of friendship in a sensitive interplay that would feel very realistic for a conventional coming-of-age drama, much less a horror film.
The premise lends itself to a metaphor for teen sex, one that Mitchell complicates with the ever-changing form of Jay's tormentors and the detail that they will only pursue their victims slowly, on foot.  They're never a powerfully overwhelming force but a consistent creeping dread in the back of Jay's mind.  What she is interpreting, Mitchell cannot truly say.  His script mines a motherlode of mental triggers, from post-pubescent confusion and anxiety about sex to a recalling of the emotional scars left by our earliest intimate relationships, even suggesting a component based on the repression of sexual trauma.
The last thing this movie needs is a moral, but it seems to be grasping at a larger purpose that is not made fully clear.  Granted, that's Mitchell's likely intention, but his lyrical approach short-sells the potential of the conceit.  He delights in constructing a formal mystery house of atmospheric slow zooms, pans that lead to nowhere, and nerve-fraying sound design.  It's top-notch horror movie affect.  It's also pretty frustrating without the right amount of payoff.  It Follows becomes a slow-speed chase film for almost its entire second half, a repetitive exercise no matter how many times the nightmare changes its disguise.  Mitchell's gift for wan understatement also doesn't mesh well with a young cast struggling to communicate the film's intensely psychological conflict.  It Follows is ultimately a great idea resting upon a wobbly framework, trying mightily to strike its own balance between the codification and deconstruction of horror tropes.

This review was originally posted to Screen Invasion.
Posted by Eric Ambler at 11:33 AM 1 comment: